Get to know comedian Gina Yashere 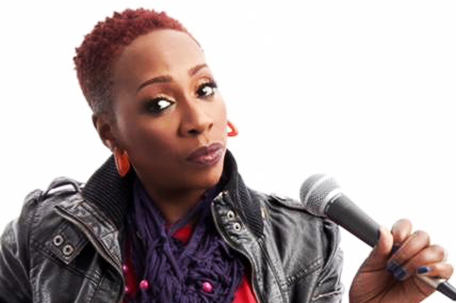 They say that laughter is the best medicine.

As it pertains to comedy, names like Richard Pryor, Whoopi Goldberg, Paul Mooney, Wanda Sykes, Eddie Murphy, Dave Chappelle and Tiffany Haddish have been giving fans their proper dosage of laughs for many years.

Gina Yashere is a talented new “resident” in the comedy medical center.

Born in London, England to Nigerian parents, Yashere has been making our friends in the United Kingdom  laugh for quite some time. She’s also been making waves here in the States. After being featured on Live at the Apollo, making the top 10 on “Last Comic Standing,” and becoming the only British comic to appear on “Def Comedy Jam,” Yashere’s career is on an upward trajectory with no signs of slowing down. She’s also got a new film, a Netflix special and a world tour coming up.

When I sat down with Yashere recently, she talked about her journey and how it’s gone so far.

Members of the entertainment industry often long for the moment when they are able to cross over to various markets. Having crossover appeal and being able to draw audiences all over the world is no easy task. Yashere, however, was able to accomplish this transition seamlessly.

“The transition working in the American market has not been that difficult, because in England, we get all your movies and TV shows, so we understand what you guys are about and we get your language,” Yashere said. “We even use some of your colloquialisms. So coming over, all I had to do was slow down my London accent so you can understand me. It’s just been a matter of working hard and just waiting to get noticed.”

Yashere’s consistent ability to bring in the laughs has been widely recognized.The Hollywood Reporter, named her one of its “Top 10 Rising Talents,” something that she was happy for, but didn’t let go to her head.

“The Hollywood Reporter’s Top 10 Rising Talent was a really nice surprise quite early on after arriving in Los Angeles from London,” Yashere said. “It was really great to be recognized, but I carried on working to turn that recognition into something else… that was just the beginning.”

Yashere is certainly no stranger to hard work. Unfortunately, hard work and a salary that reflects that don’t always go hand in hand. In recent news, Oscar-winning actress and comedian Mo’Nique made a call for people to boycott Netflix after they offered her less than what she believed she deserved for a potential comedy special. This hasn’t escaped Yashere’s notice.

“I love the fact that there’s more Black women getting opportunities on TV. I think we need more… and I’m saying that purely from a selfish standpoint so I can get on,” she said. “But the whole, Black women comedians getting paid less than everybody else… yes it’s definitely a problem! It’s not just in the comedy industry, it’s in every industry. Black women tend to be at the bottom of the pile when it comes to pay equality. So I think Mo’Nique went about it the wrong way, but that doesn’t diminish what she’s actually saying and what Wanda Sykes is saying. Wanda Sykes should definitely not be offered $250,000 when there’s a load of mediocre comedians out there who are getting offered a lot more for a lot less.”

In addition to Yashere’s stand up work, she has been busy lending her voice to the new film, “Early Man.” From the creators of “Wallace and Gromit” and “Chicken Run”, “Early Man” tells the story of of a primitive Stone Age tribe led by Chief Bobnar that faces an epic battle against the Bronze Age. Yashere plays the character Gravelle.

“My character Gravelle is a member of the tribe,” Yashere said. “She’s a hypochondriac. She always thinks that she’s going to get ill, that something is going to hurt. She’s always worried about being injured, yet she’s quite a delicate character… very fun to play.”

Although Yashere enjoys the creativity of acting and voice acting in particular offers, she was clear that comedy has and always will remain supreme in her world.

“I see myself as a comedian who can act. I’ve never come into this comedy industry going, I’m going to use comedy as a stepping stone to get into acting,”she said. “I love doing comedy and if I made millions just doing that every year, I’d be more than happy to just go with that. But I do enjoy doing the voice over acting. It’s fun, it’s easy… I stand in the studio and just do silly voices and I get paid so it’s always great to do. I do enjoy the acting. I like the different facets of entertainment but comedy will always be my first love.”

So what’s next for Gina Yashere? Answer: There’s a lot on her plate! “Early Man” is in theaters nationwide, she’s currently the British correspondent on Comedy Central’s “The Daily Show with Trevor Noah” and her stand-up special as a part of the “Standups Season 2” will be released on Netflix on March 20th. Additionally, Yashere has tour dates all over the world that fans can look forward to throughout the year.

To find out more about a tour date near you and to keep up with all the things Gina Yashere is doing, visit her website at http://ginayashere.com.