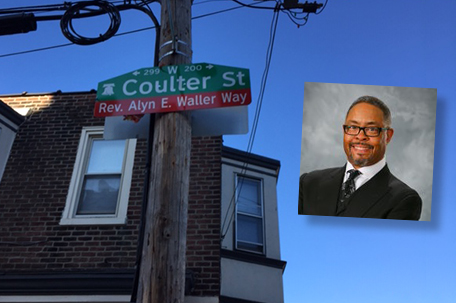 A longtime Philadelphia religious and civic leader was honored with a street in his name.

The 200 block of West Coulter Street, home of the Enon Tabernacle Baptist Church — East, was renamed Rev. Alyn E. Waller Way on January 27 before a crowd of over 300 parishioners, city dignitaries and clergy members.

Pastor Waller, who has served as the congregation’s senior pastor for 25 years, called the renaming a humbling honor.  Waller compared his pastoral journey to a winning sports team that relays on the support of its members.

“I might have been selected as the quarterback of this winning team but I could not have accomplished what I have without the support of a good team blocking and tackling when necessary,” Waller said.

Philadelphia City Council honored the local church leader for his work. It was Councilmember Cindy Bass (D – 8th Dist.) who introduced the measure. She noted that Rev. Waller, with the support of his wife, Dr.  Ellyn Jo Waller, have worked with abuse victims and address issues of education, employment and healthy living.

State Rep. Sharif Street (PA-3rd Dist.) presented Waller with a citation from the Commonwealth of Pennsylvania for the occasion. “His ministry is not limited to the Enon Family. He extended his calling beyond the walls of the church and helped people in the City of Philadelphia, the region, the Commonwealth and beyond,”  Street said.

Waller assumed the helm at Enon in 1994 with less than 300 members. Under his leadership, the church established a second location in 2006 and now has a membership of 15,000.