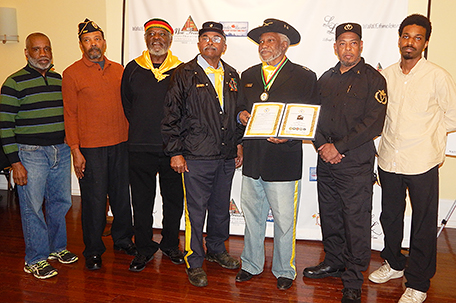 The National Federation of Black Veterans Network (NFBVN) recently honored Gen. Milton McIntyre, East Commander of the Resurrected Order of the Buffalo Soldiers, with the NFBVN Victory Crown Medal for his service with the organization and in the United States Army.

The non-profit organization, dedicated to helping veterans and their families improve their quality of life, gave him the honor at the group’s April 6 meeting.

Upon receiving his award, Gen. McIntyre gave thanks to his family, who was there and shared stories about his life, and fellow commanding officers for their service. After celebrating his 80th birthday this past February, he remains caring, energetic and humble, despite having accomplished so much in his life.

McIntyre studied vocational agriculture at Pender County Training School in Rocky Point, North Carolina. He was an active member of the 4H Club and the New Farmers of America, in addition to playing trumpet in the band and participating in the school’s Drama Club.

McIntyre enlisted in the Army Corp of Engineers in 1957 and worked as an engineer equipment mechanic.  He also graduated from the Non-Commissioned Officer School at Fort Belvoir, Virginia and served as an engineer in Taiwan. Upon his return, McIntyre served as a guided missile technician at Ft. Bliss, Texas. He was trained as a Special Forces Green Beret Medic and served in the 7th Special Forces at Ft. Bragg, North Carolina. At Ft. Bragg, the general distinguished himself as a medic.

Shortly after the assassination of President John F. Kennedy in 1963, and at the beginning of the Vietnam War, McIntyre ended his Army career. Discharged in March 1964, he returned to Philadelphia and enrolled in Temple University Hospital’s School of Respiratory Therapy. After his graduation, he worked at the University of Pennsylvania Hospital for two years and became a registered respiratory therapist. He was also instrumental in the establishment of the School of Respiratory Therapy at Crozer- Chester Medical Center, later becoming its director. He retired as a respiratory therapist in 1987 and started a real estate business located at Girard and Carlisle Avenues in North Philadelphia. There, he managed and revamped properties until retiring in 2007.

Gen. McIntyre’s years of continued service to his country are deeply appreciated. Younger members of the armed forces can learn from his legacy.