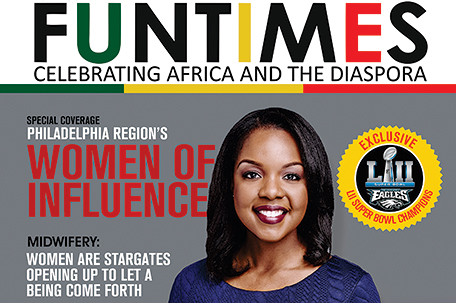 FunTimes Magazine will host its March/April Release Party on Wednesday, March 28, 2018 from 6 to 8:30 PM. at The African American Museum in Philadelphia, 701 Arch Street.

The event will feature a Diaspora Women Power Summit, where participants will reflect on the intersectionality of the African-American, African and Caribbean communities.

For Women’s History Month, FunTimes Magazine asked 13 of the region’s Women of Influence to share their stories. Through a series of questions, the women reflected on the defining moments of their careers and challenges they faced in the professional environment.

The 13 women being recognized are:

The public is invited to come mingle with the invited guests and the FunTimes’ family of writers and supporters.

Founded 1992 in Monrovia, Liberia, FunTimes Magazine’s mission is to celebrate Africa and the Diaspora. FunTimes is the predominant culture and lifestyle magazine for African, Caribbean and African American communities in the Mid-Atlantic region.