From singing background for Mariah Carey to performing around the globe, singer Kharisma McIlwaine is “All In” with debut single 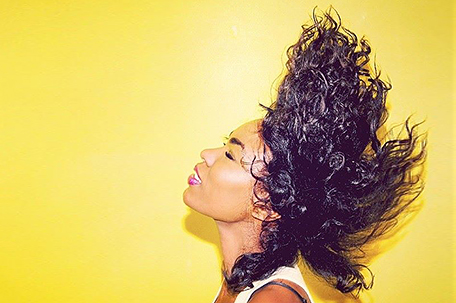 Meet Kharisma McIlwaine, a third generation musician, whose heavenly voice ranges from first soprano to whistle register (think Mariah Carey). A woman whose voice embodies the angelic sounds of Minnie Riperton with a gentle version of the vocal prowess of Whitney Houston.

It’s an interesting comparison, considering McIlwaine sang background for Mariah Carey. We all know Carey is particular who she will allow to sing background with her.

McIlwaine sang as part of a choir that Carey needed for a performance in Philadelphia and was looking for the best.

McIlwaine did not need to audition. She received a call from Carey’s team that she had less than 24 hours to learn the song.

In addition to her work with Carey, McIlwaine has also sung background for Kenny Loggins, Kathy Sledge, Pink and has opened for Eric Roberson, Kenny Lattimore, and Deborah Cox.

McIlwaine, who is also a classically trained singer and pianist since age 11, and has been performing with her family since she was a very young child.

But as of June 11, it’s now all about McIlwaine and her debut single, “All In,” which is available on all music platforms.

“All In” will make you want to find that special person. It is a feel-good melodic single that can be played on urban and pop stations and defies genre.

Although she “pleads the fifth” when sharing details of her love life, she spoke about what inspired the single.

“I’m just inspired by everyday life stuff, what it feels like when you’re first in love,” McIlwaine said of the song, which she wrote last summer during the thick of the pandemic.

“Many, many moons ago I had a single called, “I Think I’m Ready,” but I never officially did like a drop,” said McIlwaine who has performed around the world including Morocco.

“This officially is my first single.” Prior to dropping, fan anticipation had been growing for McIlwaine’s debut single, which will also be featured in a forthcoming EP (a half length album).

After all, she has been in the music business since she was a child. During her teen years, Clive Davis’s J Records was interested in possibly signing McIlwaine.

“It was actually two opportunities with J Records, one that was blocked by another producer,” she said. “I later found out that he had an artist that was around the same age as me that he was pushing for, so I actually got up to J-Records and then they were like: “Oh, your meeting was cancelled.”

The second opportunity she felt the content was too mature for her age, so she passed on that opportunity with no regrets.

But neither setback stop McIlwaine from soaring.

McIlwaine’s immense talent and musical gifts were passed down through the bloodline on both sides of her family and destined for her to continue.

Her uncle Lloyd, known to the world as Luscious Lloyd, was a member of the iconic funk group the Bar-Kays. One of the group’s many hits include “Freak Show on the Dance Floor.”

“My other uncle Chubby played with Sister Sledge, the Jackson Five and Billy Preston and worked with Stevie Wonder,” McIlwaine said.

“My dad used to be in a group called the Chill Factor and they performed at the Uptown Theater.” (the historic theater in North Philadelphia and part of the nationwide ‘chitlin circuit’ where artist such as The Supremes, Jackson 5, Smokey Robinson and more iconic legends once performed).

She had no idea that he was not her biological uncle until she got older. That’s how integrated Rick James was into McIlwaine’s family.

“He was just Uncle Rick. He called me when I was acting up or whatever,” said McIlwaine of James, who adopted her as his niece while he was on tour with her uncle.

“He was so wise, so he always had a lesson to offer,” she recalled. “It was funny because mostly in high school, he would just call me like ‘Kharisma, listen to your parents! Whatever they tell you to do, you do it!’”

“He never yelled at me. It was just more like the stern tone and then we’d go right back to joking and laughing and talking,” McIllwane said.

Being a “Jill of all trades” and a master in all of them, McIlwaine expanded her love of the arts which included modeling, event commentating, television, appearing in commercials and as an on-air host and community ambassador for CBS3/The CW Network and producing live coverage of BET’s “The Home Going of Whitney Houston.”

She describes getting the call to produce the live coverage of Whitney Houston’s service as very hard.

“I felt honored, because she influenced me so much in terms of music,” McIllwaine recalled.

“But at the same time I’m a wreck. How am I going to do this, and pay homage to this woman that I love that I never had a chance to meet?”

Aside from the national spotlight, Kharisma is also a here at the Philadelphia Sunday SUN penning the weekly SUN Spotlight column in addition to hosting the online component as a show that airs every Thursday at noon on The SUN’s Facebook page @Philadelphiasundaysun.

McIlwaine has interviewed the best as a writer and columnist, including many for The Philadelphia Sunday SUN, such as legendary actor Glynn Turman and Colman Domingo for (Ma Rainey’s Black Bottom), director David E. Talbert and his producing partner and wife, Lyn Sisson-Talbert of “Jingle Jangle: A Christmas Journey,” to name a few.

As for her new single “All In,” McIlwaine gave more insight to the inspiration for the song.

“A lot of us look forward to the weekend as our time to do the stuff that we actually enjoy doing because we’re working so hard during the week,” she said. “For whatever reason that just inspired me.”

“One of the lines in the hook is, ‘You make every day feel like the weekend,” she added.

“It inspired this whole ode to what it feels like when it’s new love and spring and summer and everything just makes you happy.”

Count on seeing and hearing more from Kharisma Mcllwaine. This songbird is just beginning to fly!

“All In” is written by McIlwaine and produced by David Lyve. It is now available on all music platforms. Visit www.realkharisma.com for more information.