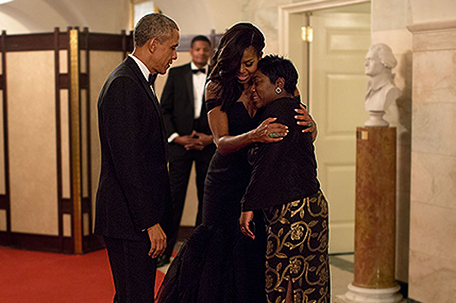 By any standard, going from community college student to White House social secretary in just six years is the stuff of which dreams are made. And Deesha Dyer would probably be pinching herself, if she had the time.

Dyer, however, is too busy doing her job, which could arguably be described as the political arena’s most important events planner. Just last week, she and her team arranged for President Barack Obama to welcome Pope Francis on the South Lawn; planned for him to host President Xi Jinpig of China; and then organized a state dinner for the Chinese president and hundreds of other VIPs.

No worries, though. Judging from the hug she received from First Lady Michelle Obama afterward, everything went off without a hitch.

Dyer, 37, who graduated from Community College of Philadelphia with an associate’s degree in Women’s Studies, is only the second African American woman to hold the position of White House social secretary. The first was the glamorous Desiree Rogers, a Harvard MBA whose sparkling resume and rarefied circle of friends made her just as likely to attend a White House event then to coordinate one. That’s so different than Dyer, who likes to refer to herself as a “regular” person from West Philadelphia.

“I want people to see that they, too, can be here,” she said, in an exclusive interview with a video crew from Community College of Philadelphia, her alma mater. “They see people like me, regular people, working here, and that means a lot.”

After attending the Milton Hershey School in rural Hershey, Pennsylvania, a boarding school for low-income students, Dyer began her college career at the University of Cincinnati, but dropped out during her freshman year. “College is expensive,” she explained. “At the time, I just couldn’t afford it.”

Over the next 10 years, she worked in Philadelphia as an assistant at a real estate firm and as a freelance hip- hop journalist writing for an alternative weekly. She traveled the world. However,  she realized she wanted more education, and figured age 29 was as good a time as ever to go back to school.

At Community College of Philadelphia, Dyer finally found the financial resources she needed to keep going and Women’s Studies,  a program of study that whetted her passion to learn about the impact of changing gender roles on personal identity, families, educational institutions, the workplace, and the civic and political world.

“The surprising thing about community college is that you have the same great community, the same student life center, the same challenges and successes as another college,” Dyer said. “It was a good decision for me to go back.”

Dyer epitomizes the power of community colleges to transform destinies, something her boss, President Obama, has made as one of the mainstays of his administration. Since taking office, the President has been on a mission to make community colleges stronger and more accessible, ensuring that they deliver educational opportunities for millions of Americans each year.

It was at Community College of Philadelphia where Dyer applied for the White House internship that would change her professional life. She’s enjoyed a steady ascent since arriving as an intern at the White House in 2009 at the age of 31 and working for awhile  in the scheduling office before being named Deputy Social Secretary in 2013. She was promoted to Social Secretary in May 2015.

“From the day Deesha started in the Social Office, she impressed me with her passion, creativity, public-mindedness and relentless competence,”  said First Lady Michelle Obama. “Deesha has worked tirelessly to truly make the White House the ‘People’s House.’”

When she is outside of the White House, Dyer works just as hard, mentoring young girls and boys and volunteering in Washington and Philadelphia. Her message typically is focuses on the importance of giving back.

In the coming years, jobs requiring at least an associate’s degree are projected to grow twice as fast as those requiring no college experience. “We will not fill those jobs – or keep those jobs on our shores – without the training offered by community colleges,” President Obama has aid.