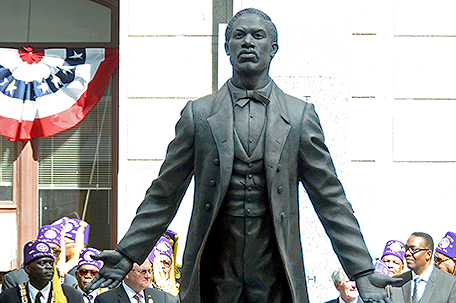 Community groups and members of the Black Clergy statewide are banding together to make sure that everyone who can vote does so in November.

One of the most prominent features of the Octavious V. Catto memorial at City Hall is the ballot box located at it’s center, a symbol of the commitment to the Black voting power that led to his death.

On Wednesday, a coalition of faith leaders, community leaders, and members of voter protection organizations came together to announce an effort to continue Catto’s work by ensuring that everyone who wants to vote, either by mail or in person, can.

Groups including the Catto Voter Empowerment Initiative, Forum Philly, the Black Clergy of Philadelphia and Vicinity, the Pittsburgh-based Black Political Empowerment Project and the League Of Women Voters will band together to put on a coordinated voter registration effort, said Joseph Certaine, one of the project’s organizers.

The idea behind the non-partisan effort is making it safer and more efficient for people to vote in November, Certaine said.

“We’re trying to get as many people registered and ready to vote early by mail as possible,” he said.

The project will target 18 jurisdictions in 16 Pennsylvania counties where communities of color are underrepresented in terms of the electorate, said Tim Stevens, chair of the Black Political Empowerment Project.

In order for the political fortunes of these communities to change, they have to make their voices heard electorally, Stevens said.

“We have to make November 3 an historical moment,” he said. “If we vote in every election, we have more power.”

Due to the coronavirus pandemic, Pennsylvania voters went to the virtual polls on June 2 for the Pennsylvania Primary. While 200,000 Philadelphians took advantage of mail-in voting, the combination of some voters not getting their ballots in time and a reduced number of polling places led to long lines, lots of provisional ballots, and some confusion.

In addition to helping marginalized communities assert their right to vote via mail, the Voter Empowerment Initiative also hopes to help voters be able to vote without intimidation, Certaine said.

Voter protection volunteers will be needed to do this, as will be churches to let them gather so that they can be sent where needed.  If you would like more information or to volunteer to be a part of the Catto Voter Empowerment Initiative, please go to: www.cattoinitiative.org.