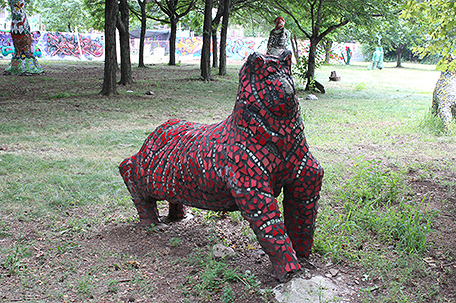 ABOVE PHOTO:  Scene from the Life Do Grow Farm in North Philadelphia.  (Photo by Leona Dixon)

This year’s festival theme was “Land Sovereignty and Liberation.”

“Freedom is dangerous and precious, too…” –Octavia Butler

The forces of creativity, community involvement, self-awareness, and self-determination and the transformation they can provide when combined were celebrated at the Hoodstock Festival last weekend. 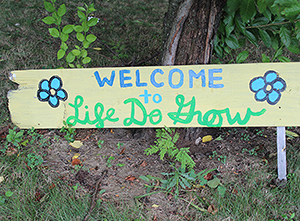 The fourth annual event, organized by Philly Urban Creators, incorporated the spirit of risk takers, change agents and those who have boldly taken control of the narrative of people of color and all genders by bringing music, art and dialogue to the Life Do Grow Farm, located on 11th Street between Dauphin and York Streets in North Philadelphia.

Philly Urban Creators’ mission is to transform neglected landscapes into dynamic safe-spaces that foster connectivity, self-sufficiency, and innovation. In partnership with the Philadelphia Museum of Arts’ PHL Assembled and Soil Generation, the group has spent the past year exploring the theme of sovereignty through art and inter-generational dialogue.

Food justice is a huge part of that equation.

“People can’t live on bread alone,” said Sonia Galiber, director of operations for Philly Urban Creators. “[Philly Urban Creators] try to tackle healing from all angles, not just through food, but through body, spirit, motion, and creativity. HoodStock is the climax of that. We invite everyone to be a part of it, to experience the feeling of freedom, of self-expression, of food and of choice…just to be yourself.” 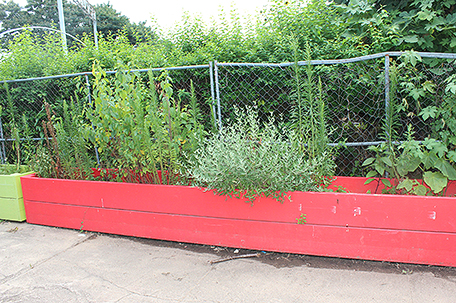 Life Do Grow Farm has been part of the North Philadelphia community here for seven years, growing steadily in size and stature. They feature different tiers of farming, ranging from traditional rows, raised beds, green houses, and aquaponics.

During the festival, a sizable group of people from the neighborhood and regional supporters enjoyed tours of the farm, which adheres to organic growing practices, and purchased some of the delicious, freshly harvested mid-summer crops at the farm stand, such as potatoes and leafy greens. Produce is available at the farm stand throughout the summer and both EBT and SNAP benefit programs are honored there. 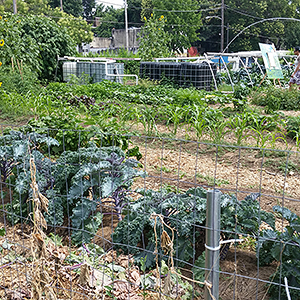 A petting zoo that featured goats, a lamb, and a jackrabbit was a big hit with the crowd during the earlier part of the day, as were the children’s pony rides. Hoodstock also featured an art gallery, exhibitors, and local vendors, as well as the Second Annual Graffiti International competition, which gave graffiti artists the chance to spotlight their artwork.

Galiber, 25, has been Philly Urban Creators Director of Operations for over a year but has been involved with the farm for four years – the majority of its seven-year existence. Galiber explained that sets Life Do Grow Farm apart from other similar efforts in the city.

“Our project is very political, and it’s also very artistic,” Galiber said. “I think those two elements really distinguish our urban agriculture project from all others. We’re very intentional about the politics of food. Having access to fresh produce, and that being an option, is key in exercising freedom. Freedom is having choice… we work for food justice. We’re not just here for anti-hunger, we’re here for justice.” 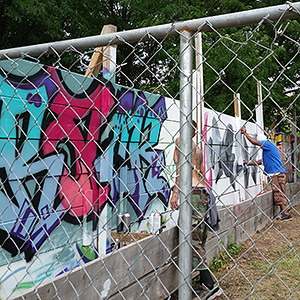 Competitors in the 2nd Annual Graffiti Invitational at Life Do Grow Farm during the HoodStock festival. All forms of creative expression are encouraged on the space. (Photo credit: Amy V. Simmons)

“Freedom also entails expression,” Galiber continued. “This is why creativity is so crucial to this space. People grow faster, more boldly and beautifully when they are surrounded by beautiful things, and when they hear beautiful music. Food is the same way. I really believe our food tastes better because it grows in a beautiful place, where you constantly have artists coming through, and sharing their energy here. It’s not just the visual art you see; we also have musicians that come through who have live jam sessions on the farm.”

She had high hopes for this year’s Hoodstock Festival.

“I hope as many people as possible come through this space, and I hope all of them feel the love that we feel in this space,” Galiber said. “I hope they feel empowered and that they take that with them…and that the young people who work with us see the potential for this space, and for themselves. We want them to take over someday, and they’re doing it already, transitioning into leadership roles and taking ownership over everything we do here. We just want that to continue.”

The surrounding community is very much a part of Life Do Grow Farm.

“We wouldn’t be here without them,” Galiber explained. “Everything we do is routed in our community; we don’t consider ourselves as separate from it. We are the community.”

Younger residents of the neighborhood are especially enamoured with the farm.

“Youth development is something that we take very seriously, and that we invest a lot of energy into,” Galiber said. “We have teens employed here from our neighborhood who are continually contributing to the vision of what this space can become. But they are also very much a part of our operations. They own this space. In the summertime, we have a program for six weeks, where we have close to 30 kids who are enrolled and working with us.”

The organization also has two gardens in the neighborhood, where two community engagement managers help residents to grow their own food.

“Teaching folks to be independent is very political,” Galiber said. “I think what we do is very radical. Freedom starts with food… what is happening is food apartheid…everyone talks about food desert this, and food desert that, but deserts are a natural occurrence. What is happening in Black neighborhoods is not – it’s very intentional and very oppressive. We’re not trying to fix the system…we’re trying to build a new one.”

Gentrification is never too far from the minds of Life Do Grow Farm ‘s staff, partners, and supporters. They hold a five-year lease from the City on the space, something they don’t take for granted.

“Land is what dictates wealth, and wealth is what dictates economic stratification,” said Galiber. “Gentrification is a monster that we talk about and think about every day. Being in the Temple[University] neighborhood, it’s hard to avoid…we know that this property value is going up just from us being here. We are trying to build the spirit of hope, resilience, and pride in Black and Brown neighborhoods so that folks can experience ownership in their hearts, and in the land.”

The farm is active from early spring until December. The winter downtime is not unproductive, however.

“We do a lot of program evaluation, try to reflect on the year, and continue to build and plan for the next year,” Galiber said. “We also do a lot of fundraising, so we might not be raising food, but we’re raising funds. This past year, we were able to raise 25K to support our teen staffers beyond the summer program… [the spring staff] made a huge difference in our operations as well. We’re lucky to have a group of supporters that have our backs in many ways.”

For more information about Life Do Grow Farm, visit: www.phillyurbancreators.org.

Made In America Festival takes over Philadelphia