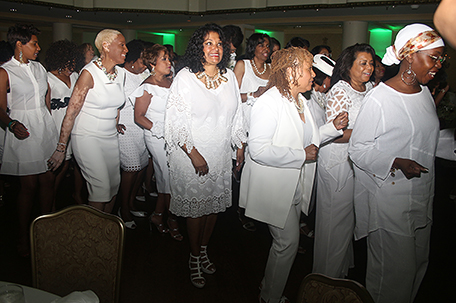 The Philadelphia Chapter of The Links, Incorporated hosted its fundraiser, “Smooth Sounds: An Afternoon Party in White.”  The Founding Chapter of the prestigious organization of over 15,000 women in 283 chapters, held its signature fundraiser at the Hyatt at the Bellevue in the heart of downtown Philadelphia on June 11th.

“I’m very excited about the success of our event. The funds we raised are earmarked for scholarships, our multi-year program at Paul Robeson High School for Human Services, our Historically Black Colleges and Universities initiative, and combating human trafficking in a new partnership with the Salvation Army,”  Dr. Mahlene Duckett Lee, President of the Philadelphia Chapter said.

Mariska K. Bogle and Terri Dean did an incredible job as 2017 co-chairs of “Smooth Sounds: An Afternoon Party in White,” attracting over 500 fashionably attired members and supporters wearing white, in keeping with the event’s fun theme. The Philadelphia Chapter hosted its first, hugely successful “All White Party” in 2015. “I’m proud to be a member of one of the oldest and largest volunteer service organizations in the nation,” Bogle said. I was equally proud to co-chair our fundraiser in a collective effort to raise monies to support our community and social impact programs. The entire chapter was instrumental in the success of the event. It was a true party with a purpose.”

“It was an honor to co-chair an event that was not only a great time for our guests and us, but a great way to raise funds to invest in our community,” Dean added. The biggest return on that investment will be felt at Paul Robeson High School for Human Services where we are in the midst of a multi-year mentoring relationship with girls who are presently in the 10th grade. I could not be prouder to be a member of The Philadelphia Chapter of The Links, Incorporated.” 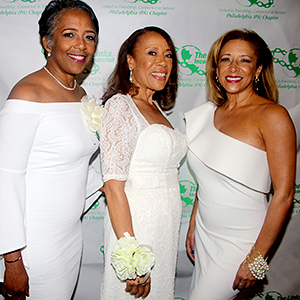 The program began with President Duckett extending a warm welcome and thank you to guests. She then graciously introduced the  54 members and alumnae members of the Philadelphia Chapter, all Links, Incorporated Chapter Presidents and members of the organization who stood to a round of applause. Special guests Bruce Hawkins, son of one of the organizations’ founders, Margaret Roselle Hawkins, his lovely daughter, and her granddaughter, Melanie Hawkins Tudos, were also acknowledged.

The Rev. Dr. Wilson W. Goode, Sr. offered the invocation followed by fine dining, music, great conversation and all the ingredients for a terrific party.

The organizations’ history states, “The Links, Incorporated is an international, not-for-profit corporation, established in 1946. The membership consists of nearly 14,000 professional women of color in 283 chapters located in 41 states, the District of Columbia and the Commonwealth of the Bahamas. It is one of the nation’s oldest and largest volunteer service organizations of extraordinary women who are committed to enriching, sustaining and ensuring the culture and economic survival of African Americans and other persons of African ancestry.”

Congratulations  to the Philadelphia Founding Chapter of The Links, Incorporated for a successful, enjoyable and memorable event for a great cause.

Jack and Jill of America, Inc.’s Philadelphia Chapter celebrates The Roaring 20s at their annual fundraiser