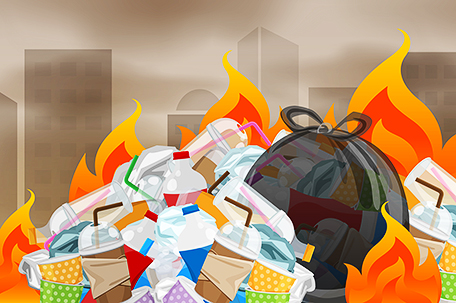 Mayor Jim Kenney’s Streets Department is poised to decide where Philadelphia’s trash will go for the next seven years. Having largely stopped the burning of half of Philly’s recyclables, an array of environmental, social justice, public health, and business organizations are calling on the mayor to stop burning much of the city’s trash.

The current seven year contracts with Covanta and Waste Management come to an end on June 30, and new seven year contracts are being negotiated at the Streets Department to be brought to City Council for approval by the end of May.  Seventy-five percent of Philly’s trash has been going to three incinerators and three landfills in nearby Bucks, Montgomery, and Delaware Counties.

“No one likes landfills, but we need to be honest about the fact that incinerating Philly’s trash is far worse,” said Mike Ewall, executive director of Philadelphia-based Energy Justice Network. “The three incinerators surrounding the city are among the region’s top air polluters, driving up asthma and cancer rates in and around Philadelphia. Mayor Kenney prides himself in being the education mayor, yet asthma is a leading cause of missed school days, and nitrogen oxide pollution from these incinerators triggers asthma attacks.”

U.S. EPA data shows that the three incinerators surrounding Philly are the 3rd, 4th, and 5th largest industrial sources of nitrogen oxide air pollution, and are the largest air polluters in Chester City, Montgomery and Bucks counties. The PA Department of Environmental Protection data shows that the nitrogen oxide emissions from incinerators in the region are 100 times higher than the area’s landfills.  By other air pollution measures, incinerators are also far worse than landfills.

“This is environmental racism,” said Zulene Mayfield, chairperson of Chester Residents Concerned for Quality Living, a group organized in Chester City, where Philadelphia trash is burned in Covanta Delaware Valley, the nation’s largest waste incinerator, burning up to 3,510 tons of trash per day. “No one would tolerate this facility in Philly or in the suburbs. There is no bubble over Chester keeping the air pollution here. You breathe your trash in Philly, too.”

For more information, and the sign-on statements, visit: www.energyjustice.net/pa/philly/.