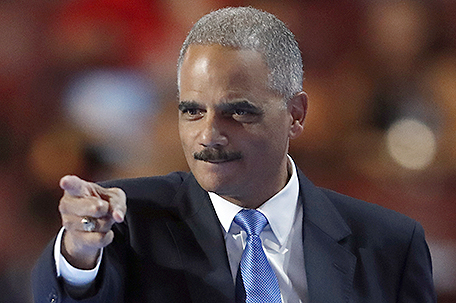 BALTIMORE – Former U.S. Attorney General Eric Holder, a leading progressive voice who has spent decades of a remarkable career at the forefront of the nation’s most critical issues, will keynote the Clarence Mitchell Jr. Memorial Luncheon on Monday, July 24th at the NAACP 108th National Convention, at the Baltimore Convention Center.

Holder will address the growing issue of how voting districts are drawn with partisan intentions to dilute actual voting power. This issue is of particular importance to communities of color due to the rise of newer strategies for voter suppression, spurred on by the dismantling of the Voting Rights Act.

An analysis from the Associated Press, found “four times as many states with Republican-skewed state House or Assembly districts than Democratic ones. Among the two dozen most populated states that determine the vast majority of Congress, there were nearly three times as many with Republican-tilted U.S. House districts.“

Embracing the theme, “Steadfast and Immovable,” the NAACP will convene at its headquarter city to set policies, programs and plans of action for the coming year, while addressing today’s challenges collectively—notably the current climate of economic uncertainty and political unrest. The organization’s national convention each year attracts some 8,000 members, supporters, branch delegates and staff, local youth activists and organizers, legislators, business leaders and celebrities all coming together to engage, network, share strategies, successes and key learnings with the purpose of driving the NAACP’s agenda forward.

A native of Queens, New York, Holder attended Columbia University where he earned a B.A. in American History in 1973, and received a J.D. from Columbia Law School in 1976.  Holder began his career at the U.S. Justice Department immediately after graduating law school. In 1988, President Ronald Reagan appointed him to serve as a judge on the Superior Court of the District of Columbia. In 1993, President Bill Clinton appointed Holder to serve as Deputy Attorney General under Janet Reno, a position he held until 2001. Holder was in private practice from 2001 until 2007.

President Barack Obama nominated Holder to be the 82nd United States Attorney General in January 2009. And, following Senate confirmation, Holder was sworn in on February 3, 2009.  During his tenure with the U.S. Department of Justice, Holder advanced civil rights initiatives to protect the Voting Rights Act of 1965, and promoted criminal justice reform with the Smart on Crime Program, which impacts sentencing.

As the third longest serving Attorney General in U.S. history, and the first African- American to hold that office, Holder is an internationally recognized leader across a broad range of regulatory enforcement, criminal justice and national security issues. In 2014, TIME magazine named Holder to its list of “100 Most Influential People,“ noting that he had “worked tirelessly to ensure equal justice.”  Holder retired from the Justice Department in 2015, and is a partner with Covington & Burling, LLP.