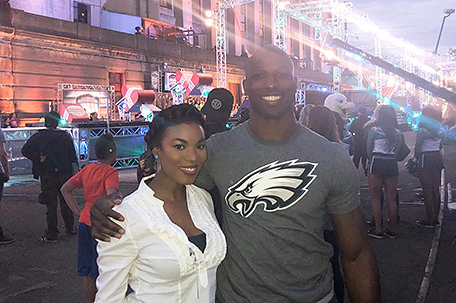 “American Ninja Warrior” is undoubtedly one of the most exciting shows on television.  Not only does  it offer a front row seat to incredible obstacle courses and entertaining commentary from its hosts Akbar Gbajabiamila, Matt Iseman and Kristine Leahy, it also gives viewers and audience members an opportunity to connect with contestants from all over the world. Contestants train rigorously and push their bodies to the extreme for a chance to compete for the grand prize of $1 million.

Each season, the show travels from city to city for its qualifying rounds. This time,  they stopped in Philadelphia at the Richmond Power Plant on May 11th and 12th.

Returning for its10th season, “American Ninja Warrior” promises to be bigger and better than ever with new obstacles and new but familiar faces. Among the new faces of ninjas is former Philadelphia Eagles wide receiver Jason Avant. Avant shared his reasons for exploring new depths to his athleticism and his excitement about taking on the course.

“You know what?… they kind of chose me to do it. I started to train but I always stayed in shape. So this here is one of those things that I want to do to test myself and see what I can do at 35. I’m an old man!” Avant said with a laugh. “They say this is my midlife crisis and so far it’s going well.”

Avant, who is originally from Chicago, spent eight seasons with the Eagles. Donning number 81, Avant was and continues to be a staple and fan favorite in Philadelphia.  Being the sports city that we are, Philadelphia has been flying high since the Eagles Super Bowl win on February 5, 2018.

The chant E-A-G-L-E-S…EAGLES! is still heard often, serving as a huge source of Philadelphia pride. “When the Eagles won the Super Bowl it was the best thing that could’ve happened to the city!” Avant said, echoing the city’s excitement.  “It uplifted so many people’s morale, gave them a sense of being a winner, and it made people happier.”

Throughout Avant’s career, he was known for his outstanding athleticism and ability to make incredible plays in the clutch. Avant welcomed the challenge of seeing what he was capable of doing after football by agreeing to compete in Season 10 of “American Ninja Warrior.”

Although he has literally been preparing for this opportunity his whole life both on and off the field, there was still a tremendous amount of work to be done. Avant explained some of the special training he went through in preparation for the show.

“You have to train specifically for this, because in football, it’s all explosive movements,” Avant said. “You don’t have to maintain prolonged strength for a long time in football… it’s for seconds.  With American Ninja Warrior, it’s mainly holding your body weight and you’ve got to be able to do it for a long period of time. So you have to train with dismounts and things like that and do a lot of gymnastics. I’m not a gymnast and I’m bigger than pretty much everybody here. I outweigh most of the guys by 30 or 40 pounds, so it’s a little bit more trying for me to hold my bodyweight. I’m glad there’s not too many body weight obstacles tonight.”

New this show’s season is the 18ft “Mega Wall.” The wall — which will stand next to the original 14’16” “Warped Wall” — offers competitors a chance to win $10,000 if they successfully make it to the top. Avant shared his plan for executing the course in general.

“We received the course instructions and we got a chance to look at everything for the first time,” he said. “I’ve done most of these things, but here in front of everybody is a little bit different. I’m used to pressure so hopefully that’ll kick in.”

“I’m excited about doing this in Philadelphia, and I believe this is the town for things like this,” Avant continued. “I’m focused on each obstacle… so the first thing I’m going to focus on is the ascending stairs… one at a time that’s my goal.”

“It’s entertaining fitness… we’re trying to keep kids in shape without them knowing about it,” he said. “ In football, I was blessed to play a game that gave people an escape from reality and that’s what I want to do for kids. So when they get into our building and see all the fun we’re having, they forget about mom and dad going through issues, they forget about being bullied at school, they forget about some of the things that are going on in their lives… that’s what I want to provide for kids. We go from [age] two, with our little playground all the way to 30… we have something for everyone!”

To find out more about Launch Trampoline Park, visit http://launchdeptford.com/ and to keep up with Jason Avant and all his upcoming endeavors, follow him on social media @j_avant81.