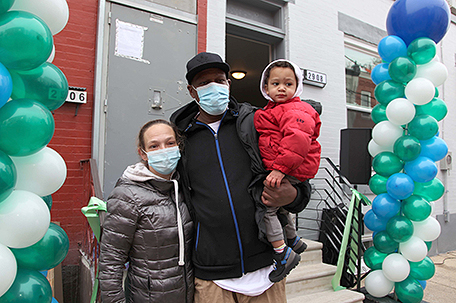 ABOVE PHOTO: Home for the Holidays: Paul Nowell and his family stand outside the newly renovated home at 2903 Westmont Street. The family, who had been living with various family members and friends, planned to move in on Tuesday afternoon. They will bring along a small Christmas tree they just bought for their son.

The Philadelphia Housing Authority (PHA) has made good on its commitment to the leader of last year’s homelessness encampment and today welcomed the first families to their newly rehabilitated homes in North Philadelphia.

The move-ins to these formerly long-term vacant properties culminate more than a year’s worth of efforts.

As part of the agreement to end the encampment near PHA’s headquarters building in the Sharswood neighborhood, PHA implemented a pilot program to facilitate the creation of a community land trust, a type of non-profit organization designed to provide community control of land and permanent housing affordability.

The Philadelphia Community Land Trust (PCLT) was founded by protest organizer Jennifer Bennetch and approved by the City in November.

“The goal of this effort was to afford the encampment leaders an opportunity to establish the land trust and build the capacity of the organization to effectively manage and maintain the affordable units over time,” said PHA President & CEO Kelvin A. Jeremiah. “None of this would have been possible without our union and city partners and the commitment of Ms. Bennetch and her team to establish an entity to serve others.”

“These new homes are a testament to the vision and dedication of our partners, who have helped us reimagine housing solutions in Philadelphia. Today we see – and we celebrate – what that means for our city. It means the stability and security of affordable long-term housing, transformed properties and neighborhoods, and momentum for our local efforts to address the national housing crisis. The City remains committed to the work ahead, and to our continued collaboration with PHA and PCLT to support housing for Philadelphians in need,” said Tumar Alexander, Managing Director, City of Philadelphia.

“I am really excited to finally be moving forward with this community land trust,” Bennetch said. “It took a lot of hard work, and a lot of ups and downs with PHA and myself, a lot of red tape and bureaucracy, but we made it work and I really appreciate this opportunity for myself and for families and individuals experiencing homelessness.”

Under the agreement, PHA committed to make substantial, renovations and transfer a collection of nine long-term vacant properties on Westmont Street in North Philadelphia to the land trust.

Construction workers from the Laborers, Carpenters, Roofers, Plumbers, Steamfitters, Plasterers, Painters, and Masons unions volunteered their time at a value of $200,000 to help renovate the first two homes, which have now been transferred to the PCLT.. Transfer of the properties was delayed until the entity was established, and the necessary insurances were in place.

The cost to renovate seven of the nine properties was approximately $150,000 per home in addition to the free union labor on the first two homes. PCLT will be responsible for renovating the final two homes. PHA has also identified 25 additional long-term vacant homes it intends to transfer to the PCLT to be renovated by the organization for other former encampment members and homeless families.

At the time of the agreement, the encampment was preventing construction of a retail and housing complex on Ridge Avenue, including a supermarket. PHA was able to find an amicable and voluntary resolution so that the $52 million project could move forward. The complex is now under construction with completion anticipated in spring 2022.

PHA has worked closely with Bennetch, offering her online courses in nonprofit certification and property management.

PHA began its efforts on the encampment residents’ behalf last October, as the agency’s Workforce Center engaged with them. Each participant was offered enrollment in workforce and supportive services. These services were provided daily both in person and by phone at PHA’s Vaux Community Building in Sharswood.

Each participant was given a one-on-one assessment with a social worker, and Project HOME provided deep supportive services and referrals to various partners to assist with their barriers. Nearly 20 encampment participants have taken advantage of support sessions.

One of the first residents to move into her newly renovated home is former homeless encampment resident Jannie Mitchell. She remarked that this new place to live means the world to her.

“I am thankful and blessed to finally have affordable housing after three years,” she said. “Not only does this give me hope, it’s also going to be where me and my children can be reunified. Finally, we have a place to call home.”

PHA continues to work closely with Jennifer Bennetch and her Philadelphia Community Land Trust on the remaining commitments.

“As I always say, there is an affordable housing crisis in Philadelphia and throughout the country. No entity can solve this vexing issue alone. It will take innovative solutions to solve the problem.

In this case, the route taken is not what we would have planned, but I am gratified that we were able to continue to open more doors of opportunity,”  Jeremiah said.