Former First Lady Michelle Obama to Join in a Conversation at Pennsylvania Conference for Women Oct. 3 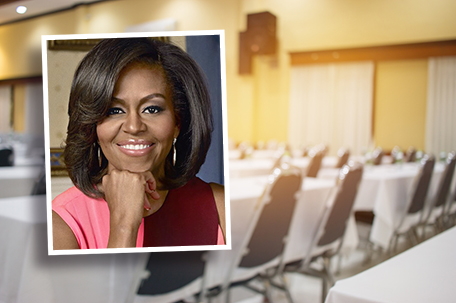 Michelle Robinson Obama served as First Lady of the United States, from 2009-2017. During that time, she launched and led four key initiatives: “Let’s Move!,” to address the challenge of childhood obesity; “Joining Forces,” to support veterans, service members and their families; “Reach Higher,” to inspire young people to seek higher education; and “Let Girls Learn,” to help adolescent girls around the world go to school.

“We are honored and thrilled to have Michelle Obama, one of the most respected women in the world, join us at this year’s conference,” said Leslie Stiles, Board President of the Pennsylvania Conference for Women. “With her career-long devotion to improving the lives of children, increasing nutrition awareness, and advocating for equal access to education, Michelle Obama’s impact clearly extends beyond her White House years.”

“We are proud to welcome one of the most inspirational women of our time,” said Joanne Ryder, Chief Administration Officer for Beneficial Bank. “Michelle Obama continues to be a force for good and for progress in advancing the interests of women and girls around the world.”

Registration is now open for the Conference. To register or learn more about the event, visit www.paconferenceforwomen.org.