For the love of the children 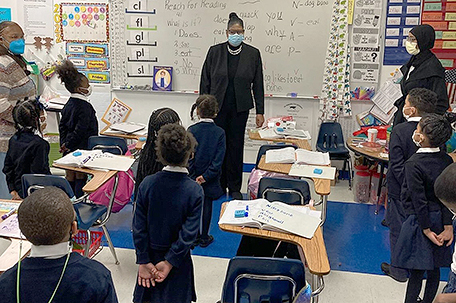 Over the last 22 years, Veronica Joyner has managed to create and run one of the Commonwealth’s best charter schools. As she looks back on her career as an educator, she’s still motivated by the children she works with.

If there is anywhere in the School District of Philadelphia where the phrase “open door policy” truly applies, it’s Veronica Joyner’s office at the Mathematics, Civics and Sciences Charter School on North Broad Street.

As she sits at a long table in the office, children come in to grab fruit from the container she keeps on a cabinet nearby. They ask about afterschool programs. They ask for help in settling disputes. They get nutritional advice, although you can’t blame a youngster for trying to get a Sunkist soda with lunch.

She gives hugs to students who are going through a tough time, encourages them to keep their heads up, and lets them know that she’s there for them.

Some students just stop by to say hello…or for a slice of afternoon pizza. And Joyner would have it no other way because, in the end, the students and parents that call the school home are the most important people in this equation.

“I had a student tell his teacher ‘I’m going right to Ms. Joyner because she’s not going to have you talking to me any kind of way,” she said. “These children can come right to me because they’re the customers and if they’ve got a complaint, I want to hear the complaint. The children are the customers. Without them, I wouldn’t have a job. So, we’re going to cater to the customers.”

Joyner also believes that empowering parents is important and that they deserve respect in the educational settings that house their children. While many schools only invite parents in when there’s a problem with a student, parents at MCSCS are invited to see what their children are learning.

“I’ve gone to schools where I’ve stood at the counter for 10 or 15 minutes, [the receptionist] is talking about what show they saw, and I’m just standing there,” she said. “Parents should be respected. That’s why it’s standing room only when I have meetings here. Everybody shows up and the teachers invite the parents personally by calling them on the phone to invite them. And if they say they can’t come, then that list comes to me and the team. I call and say, ‘What do you need? What do you need from me to get you here?’”

For the last 22 years, Joyner and her staff at MCSCS have catered to these young consumers and their families by providing an educational experience that focuses on helping children become whatever they wish. From community service projects that include feeding and clothing the homeless, to putting the school on the map through such things as an award-winning Mock Trial team, to a basketball team that has won the PIAA Men’s Basketball championship, the school provides a holistic education for its students. The school also offers an afterschool program that allows students to continue learning until 6p.m.

To Joyner, the success of the school and its graduates — some of whom are still connected to the school as teachers, staff, and members of the charter’s board — encapsulates her feelings on charter schools and how marginalized communities can be best served by them.

“For me, charter schools are the only salvation for African American people,” she said. “I don’t know if you saw the book of our graduates; we have doctors, lawyers, engineers, nurses, and teachers. For the last eight years, we’ve graduated 100% of our kids.”

But Joyner’s dedication to her students doesn’t end once they graduate. Through the Veronica Joyner Foundation, students attending college are given money for books and other necessities that helps set them up for post-secondary school success, she said.

Making sure that everyone’s child gets an equal education is how Joyner became an educational activist and eventually the creator of one of the district’s oldest charter schools. In addition to creating Parents United for Better Schools in 1984, she is also the education chair for the Philadelphia branch of the NAACP and the city’s National Action Network chapter.

While the school is multiracial, most of the 1,000 students who attend are African American. Most of those attending the school have learned about it through a combination of word of mouth and finding the school through research.

Joyner began her career in education as a teacher in the School District of Philadelphia, but after doing it for 10 years, she decided to quit. But just because she wasn’t in the classroom didn’t mean that she had stopped teaching, she said.

“I resigned my job and started teaching children at my dining room table,” she said. “I didn’t even have a job to pay my rent. It was more of a mission that God had pushed me toward. I became a licensed insurance underwriter. I was the top female agent, and they were going to make me a manager.”

But her love for the children and a desire to make sure that education is equal for everyone led to her becoming an activist. When she found out that children of color in North Philadelphia weren’t getting the same kind of hot lunches that their peers in the Northeast were getting, Joyner filed a complaint to end that practice. When she noticed that her son’s homework grades didn’t match his report card grades, she filed a complaint that led to a policy that requires teachers to keep their grade books for five years.

But while she wants to remain in education, Joyner’s thinking about the future of MCSCS — a future where she takes a step back from the day-to-day operations.

She hopes to be able to make that transition soon, but she recognizes that it might be easier said than done. In addition to the young people and staffers who come into Joyner’s office to ask questions, or get advice and encouragement, her cell phone rings with questions from the school’s stakeholders.

It’s a job that requires a lot of love and commitment, Joyner admits. And it may not be for everyone.

“My goal is to find someone to take over, and in 22 years that has not happened,” she said. “People are not committed like I am, you know, and that’s what the problem is. My standards are high, and this is my baby.”