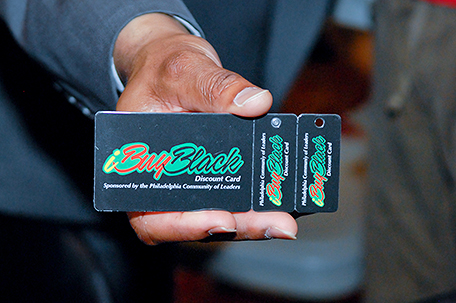 ABOVE PHOTO:  A member of the crowd displays the new iBuyBlack card. (Photo: Bill Z. Foster)

Among the group filled with entrepreneurs, business owners, political officials and activists at the unveiling of the new iBuyBlack card in the Mayor’s Conversation Hall at City Hall on Tuesday was Arnett Woodall, CEO of West Phillie Produce.

Woodall was handing out flyers telling the story of his West Philadelphia-based produce market (located at 18 S. 62nd St.) as representatives from the Philadelphia Community Of Leaders told the audience about the new card, which is designed to connect the community with Black-owned businesses.

While Woodall and co-owner Devante Gray own the store, it is actually run by young people, Woodall said. In addition to providing fresh fruits and vegetables to the neighborhood, West Phillie Produce helps young people learn the skills to become entrepreneurs.

The store decided to become part of the iBuyBlack family because they shared a mission: creating more opportunities for the City’s Black community, Woodall said.

The iBuyBlack card is a discount card designed to increase economic opportunities through helping Black businesses to grow, said Michael Rashid of PCOL. Many of the businesses offering discounts on goods and services were in attendance on Tuesday at City Hall.

According to the Pew Charitable Trust study “Philadelphia: The State of the City”, Philadelphia has a poverty rate of 26 percent, the highest in the nation for a city its size.

“Joblessness is a large reason for that poverty rate, and much of that joblessness is due to an inability of businesses based in these communities to hire from within,” Rashid said. “If more people spent money in these businesses, they’d be able to expand and the ensuing employment gain would help cure a multitude of ills.” 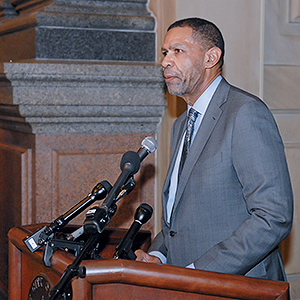 “Every dollar that [Blacks] earn stays in our pockets for an average of 6 hours,” Rashid continued, quoting a study done by economist Brian Williams, founder of PurchaseBlack.com. “In other words, I’ll get paid at 12 o’clock on Friday, and by 6 o’clock all my money has gone and has gone out of the Black community. A dollar circulates in the White community for an average of 17 days, meaning that it’s going from one group of White folks to another group of White folks. So it’s building wealth for 17 days, when our dollars are building wealth in our communities for not even a quarter of that.”

“If we spent just 9 percent of our money with [Black-owned businesses], Black unemployment would be wiped out,” Rashid continued. “That’s what this movement is all about.”

On its face, 9 percent of all of the purchases made by the 650,000 Blacks living in the City of Philadelphia doesn’t seem like a lot, said Earl Harvey, sales director for iBuyBlack.org.

But it can make a big difference, continued Harvey, publisher of the Black Professionals News and owner of the Platinum Grill in Chestnut Hill.

“I have talked with these business owners,” Harvey said. “And they want to expand. But they can’t expand without additional income. And they’ve told me that 40 to 60 extra customers a week would make that possible. With 650,000 Black people in Philadelphia, don’t you think we can redirect 40 to 60 customers a week to these businesses? Absolutely, we can. And we’re going to do that.”

Right now, 1,500 iBuyBlack cards have been sold. The goal is to get to 10,000 by the end of the year, Harvey said. You can find the participating businesses on the website, iBuyBlack.org and if you regularly patronize a Black-owned business that isn’t a part of the program, helping them to change that is as easy as letting them know it exists, Harvey said.

“We’re going to need for you to be our eyes and ears on the street, because we can’t be everywhere,” he said. “But you all can be, and we’re really going to need your support.”

The iBuyBlack card is $10 and all proceeds on the cards go toward the arts and cultural programs that PCOL does, including the return of the Black Family Reunion, scheduled to make its return this year.

Philadelphians of all ethicities are encouraged to purchase the iBuyBlack card at retail stores participating in the program. You can also purchase the card online at iBuyBlack.org.

Honoring The “Lion of Zion”