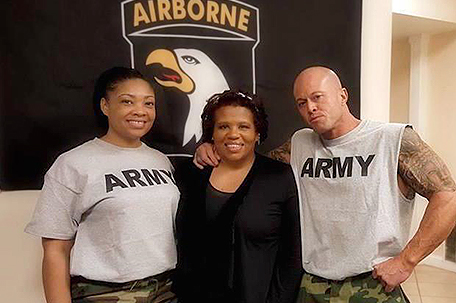 The issue of sexual assault in the military periodically makes the news, usually in the form of published articles or televised reports that include traumatized victims, jaw-dropping statistics and official outrage.

For women soldiers, who signed up to defend their country but instead found themselves fighting against assault and rape by their fellow soldiers, trying to pick up their lives after military sexual trauma presents another set of trials and tribulations whether they continue to pursue their military careers or they choose to leave the military entirely.

Those challenges have been chronicled in a new film entitled “A Sense of Purpose: Fighting for Our Lives.” According to filmmaker Jillian Bullock, the film exposes the horror of sexual rape in the military. “Tackling such an important topic epitomizes a double betrayal for the victims because they love military service and their belief in the service to which they have pledged their lives,” she said. 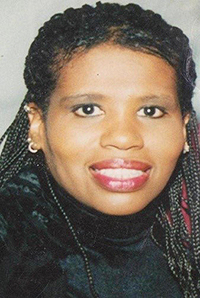 Bullock is the CEO and President of Jillian Bullock Enterprises, LLC, an empowerment and entertainment production company based in Philadelphia.

The events in the film chronicling the experiences of US Army Medic Diane Torres could be interpreted as scenes from a psycho thriller, of the horror genre. Torres struggles to cope with post-traumatic stress disorder, while attempting to re-enter society after a military stint in Afghanistan. She is haunted by the horror of being sexually assaulted by her commanding officer Captain Jake Nixon.

Torres’ experience begins while enjoying herself, after a few drinks, at local bar close to the military base. She is offered a ride back to the base by her commanding officer Captain Nixon and three army sergeants. It seems that Ct. Nixon and the three soldiers have other plans. At the base, she is raped by Nixon while the other men cheered him on.

With the sexual violation comes the start of horror for Torres: the isolation and the knowledge that things can only get worse. Distraught, Torres pleads with Nixon for a discharge, but he refuses. Eventually she attempt to go AWOL. Nixon thwarts her plan and orders her back to the military base. Eventually she is discharged upon the death of her mother, who dies in a car accident.

Bullock, a former reporter of the Wall Street Journal and a LaSalle University graduate, wore the hats of director, producer, actress, and fight choreographer, read the stories about military sexual rape and assault and she reviewed the statistics.  It is estimated that about 19,000 men and women suffer sexual assault each year in the military. Only one in seven victims reported the assaults and only one in 10 of those cases went to trail.

According to Bullock the movie’s storyline evolved in an unexpected way. “I was watching the television show “Real Sports with Bryant Gumbel” when a segment featured military veterans who used mixed martial arts as a means of coping with post-traumatic stress disorder,” said Bullock, who also trains in Mixed Martial Arts and thought the telling of the story had merit.

It was when she began conducting research to write the script, Bullock learned about the epidemic of military sexual assault and rape occurring in the military. As a rape victim herself, the subject resonated with her. She redirected the script’s focus and concentrated more on PTSD and military sexual trauma.

“I had no idea of the gravity of the issue. I just couldn’t let the story go,” said Bullock, who is now on a mission to give a voice to the survivors of what is officially called military sexual trauma.

“My research uncovered stories of women who had been raped by military recruiters, women who lost their military careers after being raped by men in their own units. And there were scores of Millitary Sexual Trauma survivors from every branch of the military. 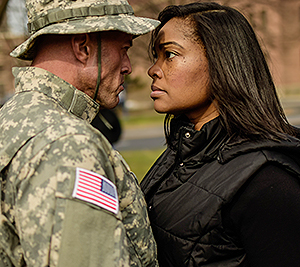 Captain Nixon and Sgt. Torres in a showdown in a scene from “A Sense of Purpose”.

Bullock also discovered horrifying stories that that did not bode well for the survivors who reported their assaults. “Many reported being harassed, shunned, ridiculed, and forced out of their regiments. Many suffer from post-traumatic stress disorder, depression, substance abuse. Many also could no longer hold a job, even years after their assaults,” reported Bullock. “Their stories were horrifying and such assaults still tend to be treated as breaches of conduct, not criminal offenses.”

It took one year for Bullock and her team to produce the film that she hopes will illustrate the plight of active female military personnel and veterans to show the downward spiral that MST survivors often face. She also wants to document the issued faced by male survivors of sexual assault.

With the spotlight on the subject, via various media, about rape and sexual assault in the military says it has committed to investing serious resources to combat the problem. One example is the Department of Defense’s creation of the Sexual Assault Prevention and Response Office (SAPRO) that is working to reduce sexual assault through “advocacy, and execution of program policy planning and oversight.

When Bullock decided to pursue the topic, she knew it was a controversial one.  However, she was inspired by award-winning documentarian Dick Kirby. “After I saw a quote by Dick Kirby, the award winning director of so many great documentaries, including “The Invisible War,” which focused on sexual assault in the military. Kirby said: “It has been a huge problem for decades. They’ve known [rape] was an issue since the 1970s. Historically, they deny the problem, blame the people who come forward, and cover it up.”

Bullock purchased the DVD and watched it. “It was impactful and it made me want to do honor to the veterans and the men and women who currently serve in the U.S. Armed Forces,” she said.

While “A Sense of Purpose” will appeal to a broad-based viewing audience, Bullock has especially targeted veterans and current servicemen and women, their family, friends, spouses. Plus, anyone who knows a veteran or a current member of the Armed Forces.

Funding for post-production remains a challenge, however, Bullock continues to raise money mainly through fundraisers and out-of-pocket funds from both herself, and producer Delayne Powe — who has been Bullock’s producing partner for the past 20 years. When Bullock and Powe — who is the firm’s Vice President– are between projects, the latter works at Jillian Bullock Enterprises, LLC as a publicist.

Lamont Fountain serves as a Producer/Director of Photography/Editor on the film.

The movie was developed between December 2015 to December 2016, with cast and crew primarily working on weekends.

As the filmmaker travels the country and promotes the movie through speaking engagements, her focus is very clear. “The movie deals with PTSD, military sexual assault and the aftermath of what happens to these veterans and to active military personnel,” said Bullock. These are the topics she speaks about along with Mike Beason, who accompanies her during most promotional activities. He portrays himself in the film. Beason is a veteran and a military sexual assault survivor, who suffers from Post Traumatic Stress Disorder.

Presently, Bullock continues to shop the movie to major film festivals. She believes those venues will ultimately help her secure major funding for an international distribution . At the same time, it would bring more awareness about the sexual assault epidemic in the military, and it would also highlight the impact of PTSD effects on victim’s families, friends, co-workers, spouses, children, and society as a whole.

Had Bullock gone the documentary route, the necessary funding might have been easier to secure. But as a feature film, she had more leverage when shaping the story’s narrative.  “With a feature film, although my movie is inspired by true events, as a director I can shape the type of story I want to be told. I wanted my movie to be educational and informative, but also entertaining.”

“Due to the subject matter, post-traumatic stress disorder and military sexual trauma, I didn’t want to pull any punches, nor did I want to sugarcoat anything” said Bullock. “I wanted to expose the ugly truth about what goes on in the military. To do that I had to keep the movie raw and real.”

In the end, Bullock hopes that “A Sense of Purpose” will keep the issues of military sexual assault in the forefront by exposing the issues it raises, while bringing more awareness.

In Bullock’s previous screenplays, many slated for film projects, she probed social issues through characters who ultimately overcame their circumstances.  There is the award-winning screenwriter, who is recovering from an emotional breakdown and must determine who is terrorizing her before she goes insane (“A Cup Full of Crazy”). Then there is her own story about how she, as an African-American  teenager,  fought to overcome homelessness, drugs, and prostitution in order to become a screenwriter and filmmaker thereby fulfilling the dying wish of her stepfather, who is a Philadelphia Italian mobster (“Here I Stand”). There also is the Philadelphia crime scene investigator, who is working on a high-profile murder case and uncovers evidence that links her current case to the accidental death of her husband (“Listen to What the Dead are Saying”).

Like the characters in her screenplay that overcome some form of adversity, Bullocks is hoping those who are meeting the challenges of MST will do the same.