Film “We Shall Not Be Moved” shown as part of Opera on the Mall, Sept. 29 at Independence National Historical Park 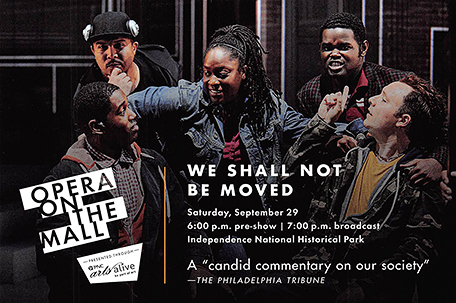 Pack your picnic baskets and blankets for a FREE, big-screen broadcast of “We Shall Not Be Moved!”

Now in its eighth year, Opera on the Mall has attracted nearly 30,000 opera fans and newcomers to Independence National Historical Park for an evening of opera under the stars. Have your photo taken in our free photo booth or grab a bite from food trucks on 5th Street.

Register for “Opera on the Mall” and be automatically entered to win two tickets to our Spring 2018 production of Puccini’s La bohème!*

About the opera: Combining spoken word, contemporary dance, classical, R&B, and jazz singing, “We Shall Not Be Moved” tells the story of five North Philadelphia teens on the run.

Their confrontation with a local police officer rises from the enduring ashes of the Philadelphia Police Department’s 1985 bombing of the MOVE compound in West Philadelphia.

This opera asks “For whom America the Beautiful?” and raises timely questions about national identity, race, gender, the failure for some in the public education system, and personal responsibility.

With music by Daniel Bernard Roumain, libretto by Marc Bamuthi Joseph, and directed by Bill T. Jones. Recommended for ages 14 and up due to strong language and violence.

‘Terror at the Mall,’ documentary on siege of Westgate Mall in Nairobi, Kenya, premieres on HBO, Sept. 15