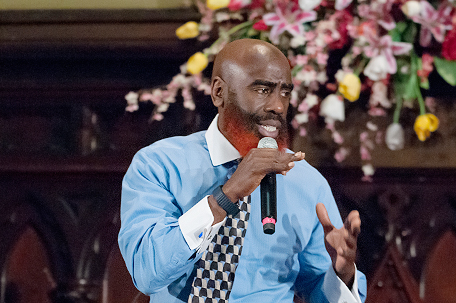 In order to become the City of Philadelphia’s next African American District Attorney, Tariq El-Shabazz is going to have to overcome a lot of things that have nothing to do with his abilities as a lawyer.

That Tariq El-Shabazz was a Golden Glove boxer has probably served him well in his attempt to become only the second African- American in the Commonwealth of Pennsylvania to become a District Attorney.

That’s because El-Shabazz has had to show he could take a punch practically from the moment he announced his candidacy.

At his announcement press conference, El-Shabazz was asked a lot of questions that weren’t really connected to his ability to practice law. Many of them centered on his connection to the man he hopes to replace, embattled District Attorney R. Seth Williams, and his tenure as an Assistant District Attorney in his office. Williams dropped out of the race in February, and will be headed to Federal Court in May on a 23-count indictment on charges including bribery, and wire fraud.

While he hasn’t backed away from answering questions about those tax liens, El-Shabazz kind of wonders why his tax return has gotten such scrutiny.

“I’m the only African-American in the race,” he said. “And I’m the only one being asked these [tax] questions. I don’t understand that.”

El-Shabazz is a native of Brooklyn who came to Philadelphia after graduating from Hofstra University and the University of Baltimore Law Center. In addition to serving two stints in the District Attorney’s office, El-Shabazz was also a defense attorney.

SUN: Thank you so much for your time today, Mr. El-Shabazz. I guess that my first question for you is what made you decide to run for District Attorney?

TE: It was something that I was grappling with. [Williams] had allowed me to take the lead with implementing a lot of reforms in the office. After Seth decided not to run, I took a look at the field of candidates, saw who was trying to get in the office, and felt that I was the best person for the job. I have 30 years of experience, so it made sense to me to run.

SUN: Some of your opponents got into the race hoping to directly oppose DA Williams. Would you have decided to run had he stayed in the race?

TE: He gave me the ability to shake things up, so it wasn’t necessary for me to run against him. I gave him my word that if I came to [the DA’s office], I wouldn’t do that.

SUN: You’ve mentioned that there are things that you had started reforming in the District Attorney’s office. Can you elaborate on those things and how you’ve reformed them?

TE: Before I left the District Attorney’s office, I was working with Councilmen [Curtis] Jones and [Kenyatta] Johnson on their Criminal Justice Reform Committee. Among the things we talked about were how to get rid of cash bail for non-violent offenders, not trying juveniles as adults and other common sense reforms. We were working on ways to provide more pre-arrest diversionary programs. These are things that I’d continue to do if I got back into the office.

SUN: What else do you think the DA’s office needs?

TE: I think that the office needs more diversity, and when I say diversity, I mean total diversity. That would be a big part of my hiring process.

SUN: One of the issues that have come up a lot in this campaign is the issue of police/community relations. How would you handle that issue?

TE: Before I deal with police/community relations, I first have to deal with DA/community relations. That goes back to the subject of diversity within the office. Right now, the DA’s office lacks diversity. You have to be able to engage with the community in order to communicate with people. For example, I can go into a neighborhood like the Abbotsford Homes and communicate with the residents there because I grew up under those circumstances.

As for police/community relations, I believe that I can work with Commissioner [Richard] Ross and bridge the gap between the community and the police department.

SUN: I know that it’s probably not a subject you want to talk about, but I would be less than responsible if I didn’t ask you about your taxes. Where does that stand now?

TE: I’ve been a lawyer and a business owner in Philadelphia for years. I owned a business, and I filed my taxes. Sometimes, the IRS thinks that you haven’t paid enough, and they decide to audit you based on that. You can either accept what they’ve said, or you can challenge them. When you challenge them, they can file a lien on you. As a result, the IRS filed a lien. Half of it has been paid already, so my true tax burden is $74,000.

SUN: While I can understand why you might be a little tired of answering the tax questions, can you see why – especially in light of what DA Williams was indicted for –voters might feel that they need to know what your tax status is?

TE: [Williams] was indicted because of unreported gifts from what I understand. My tax issues had nothing to do with that. I enjoy an impeccable reputation, and no one can say otherwise.

SUN: Thank you for your time, Mr. El-Shabazz.