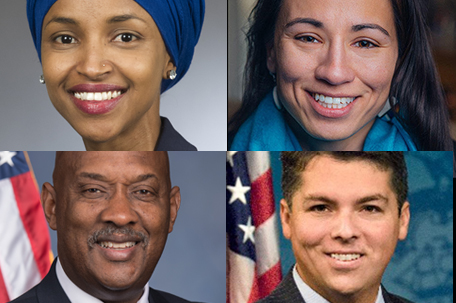 If we learned nothing else from the 2018 Midterm Elections, we learned that if you build a good election with good electoral choices, voters will come.

The weather outside was frightful here in Philadelphia on Election Day.

Rain fell steadily during the day, coming down in sheets at times. While the temperatures were pretty mild throughout, there’s no circumstance in which you won’t be freezing cold if you get drenched by rain.

Under normal circumstances, that would keep people from making their way to the polls. I mean, who wants to stand in the rain for hours waiting to vote for someone that you’re not really confident in?

But the circumstances of the 2018 midterms weren’t normal to a swath of voters who had been waiting for this moment for two years, and they acted accordingly.

Thanks to the combination of compelling races and two years of intense interest, about 113 million Americans, or 49 percent of America’s eligible voters, took to the polls on Tuesday. This was the first time in American history that midterm voting exceeded the 100 million voter mark and the first time since 1966 that turnout has reached 49 percent, according to CBS News’s “Red and Blue” podcast.

In unofficial numbers for Philadelphia, more than 50 percent of the city’s eligible voters came out to vote, with 545,383 people casting ballots, according to the Philadelphia City Commissioners.

As Democratic politicos milled around the Relish restaurant in East Mount Airy, turnout was the main topic of conversation..

“Turnout seems to be really high,” said State Sen. Sharif Street, vice chair of Pennsylvania’s Democratic Party. “It seems that people are voting with a purpose.”

“When voting in America is seen as something beyond an activity, people see the importance of exercising their franchise,” State Sen. Anthony Williams said.

But Mayor Jim Kenney, who was voter number 200 at his polling place when he went to cast his ballot, echoed the sentiments of a lot of Americans when he was asked about what might be motivating turnout.

The “lunatic”, for those of you playing at home, is President Donald Trump. While he wasn’t on the ballot, Trump was on the minds of many of the people who went to the polls on Tuesday. Since he was inaugurated in 2017, many voters have been looking forward to 2018 to tell him through the ballot box that they’re not feeling him.

And tell him they did, even though he’s kind of in denial about it.

For the first time since 2014, Democrats have control of a house of Congress thanks to winning the House of Representatives. A record number of women, including four new members of the Pennsylvania delegation, will also be there.

In fact, most of the news was pretty good for Democrats in Pennsylvania. Gov. Tom Wolf and running mate John Fetterman beat Republican Scott Wagner and his running mate, Jeff Bartos. Congressmen Dwight Evans and Brendan Boyle are headed back to Washington despite doing so from new districts.

But while there was good news for Democrats, not everything had a happy ending.

The Senate remains in Republican hands despite some seats still being too close to call at press time. Former national NAACP President Ben Jealous lost in his bid to become Maryland’s next governor.  Andrew Gillum narrowly lost his bid to become Florida’s governor, but a recount demanded by some civil rights groups might make things interesting. Texas Congressman Beto O’Rourke wasn’t quite able to beat Sen. Ted Cruz. And Georgia’s Stacey Abrams didn’t win her race outright, but because of a lawsuit filed regarding this race by some of the same Civil Rights groups contesting things in Florida, this race may be headed to a Dec. 4 runoff.

Let’s take a look back at what happened and what it might mean in the end.

Ladies First: The day after Donald Trump was sworn in as the nation’s 45th President, thousands of women and their male supporters took to the streets on Washington to serve notice to Trump that not only were they watching, he would soon have to deal with them in Washington.

While some expressed skepticism that we’d see the kind of Year Of The Woman election that the face off between Supreme Court Justice Clarence Thomas and Anita Hill spawned, 2018 turned out to be that year.

There will be 100 women in the House of Representatives thanks to Tuesday’s results. Four of them will be a part of the Pennsylvania Delegation, a group that had no women in it prior to Tuesday. Civil Rights attorney Mary Gay Scanlon, State Rep. Madeleine Dean, former Allentown Solicitor Susan Wild and former teacher and military veteran Chrissy Houlihan will be representing Pennsylvania’s Fourth, Fifth, Sixth and Seventh Congressional Districts.

The Fourth is a new district created through a gerrymandering lawsuit settled earlier this year. The Seventh District was formerly held by U.S. Rep. Patrick Meehan, who resigned after it was revealed that he had used taxpayer money to settle a sexual harassment complaint brought by a female staffer.

Women from traditionally marginalized communities also made a big splash on Election Day. Alexandria Ocasio-Cortez of New York becomes the youngest woman to ever serve in Congress now that she’ll be officially replacing Rep. Joe Crowley. The first two Native American women to go to Congress, Sharice Davids of Kansas and Deb Haaland of New Mexico, were elected Tuesday night. Haaland is a member of the Pueblo of Laguna and Davids, who also makes history as Kansas’s first openly LGBT member of Congress, is a member of the Ho-Chunk nation, a lawyer, and an Mixed Martial Arts fighter, something that might come in handy in Congress.

Congress will also welcome its first two female Muslim members. Ilhan Omar of Minnesota and Rashida Tlaib of Michigan. Omar, a Somali refugee who came to the United States as a teenager, won the seat held by U.S. Rep. Keith Ellison, who resigned to become Minnesota’s new Attorney General. Tlaib, a former member of the Michigan House of Representatives, is an immigrant from Palestine and was the first Muslim woman to serve in Michigan’s state legislature. She occupies the seat once held by U.S. Rep. John Conyers, who resigned last year due to sexual assault allegations.

Ayanna Pressley and Jahana Hayes became the first Black women elected to represent Massachusetts and Connecticut in Congress. Lauren Underwood became the first woman and the first Black woman to represent her Illinois district. Pressley has spent her career in public service focusing on issues regarding girls and women as well as economic justice. Hayes was the 2016 National Teacher of the Year and used her candidacy as a means to teach her children about civic engagement. Underwood is a nurse and served as a senior adviser in the Obama administration.

And if that wasn’t enough Girl Power for you, 19 Black women in Houston decided to run for various Harris County judicial seats.

All of them won on Tuesday night.

The LGBT community had a few things to smile about on Tuesday night.

If you go to Wisconsin, you might want to keep an eye on the sidewalks.

That’s because the people who have longed to see the end of the Scott Walker Era in that state have finally gotten their wish and you don’t want to get hit by one as he or she is turning cartwheels about it.

Walker, the man who took away collective bargaining rights away from teachers and public workers, scaled back environmental protections, enacted a fairly oppressive voter ID law, gave extensive tax breaks to businesses and did a whole host of things that made voters try to recall him, lost his race to Tony Evers, the state’s schools superintendent.

(Considering that one of the things Walker did was expand a school voucher program, that’s kind of ironic.)

Another person who got hit by karma via the voting booth was Kris Kobach.

The co-chair of President Trump’s totally needless Voter Fraud panel, Kobach has been prolific in trying to keep Kansans from exercising their right to vote. Most recently, he was ordered to take remedial tutoring on civil procedure due to how badly he defended one of his draconian voter fraud “protections”.

His opponent, Laura Kelly, watched as he tried to out-Trump Trump to win the office, but in the end Kansans, tired of watching their state be a fiscal laughing stock due to the tax cutting machinations of former Gov. Sam Brownback at the behest of the Koch Brothers, voted for someone who would get them out of the hole.

But Kobach might not be jobless for long. His patron, President Trump, needs a new Attorney General to replace the one he just fired. He’s on the short list.

Believe it or not, there’s still some things left to settle in 2018. The Congressional race between Republican Tom McArthur and his Democratic challenger Andy Kim still hasn’t been settled in New Jersey.

And then there’s the gubernatorial races in Florida and Georgia. As I write this, the vote margins necessary to trigger a recount for Andrew Gillum and a runoff for Stacey Abrams are getting ever closer.

But unfortunately, the 2020 Presidential Race is looming over the horizon.

Don’t be surprised to see some of these folks in it.

To be honest, Tuesday’s Midterms were a combination of the expected, the hopeful, and the “Wow! That happened?!”