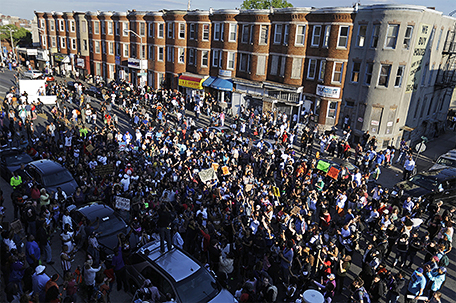 ABOVE PHOTO:  A crowd marches near the scene of Monday’s riots during a street party the day after charges were announced against the police officers involved in Freddie Gray’s death, Saturday, May 2, 2015, in Baltimore.  (AP Photo/David Goldman)

BALTIMORE — The American Civil Liberties Union is demanding answers about an apparent surveillance plane spotted for days hovering above where riots erupted in Baltimore over the death of Freddie Gray.

Benjamin Shayne, 39, saw what appeared to be a small Cessna plane hovering in low altitude in areas around West Baltimore where rioting occurred. He tweeted a question about it to his nearly 600 followers through his ScanBaltimore handle and one responded to him with information about the plane, including a screenshot of its flightpath.

Shayne’s discovery helped unveil a secret campaign of surveillance involving at least two airplanes by city and federal authorities, including assistance from the Federal Bureau of Investigation, according to the Washington Post.

A government official familiar with the surveillance operations told the Post on the condition of anonymity that the flights were areal support requested by Baltimore police from the FBI.

The planes used infrared technology to monitor people’s movements in the streets of Baltimore.

The ACLU wants answers about the legal authority of the surveillance operations. The latest surveillance planes utilized are able to monitor larger areas for longer periods of time when compared to regular police helicopters, potentially capturing images of people who are not suspected of criminal activity.

The ACLU is filing information requests with federal agencies on Wednesday.

“A lot of these technologies sweep very, very broadly, and, at a minimum, the public should have a right to know what’s going on,” Jay Stanley, senior policy privacy and technology analyst at the ACLU, told the Post.

A curfew was imposed for days after riots broke out in West Baltimore in response to the death of 25-year-old Freddie Gray due to injuries sustained while in police custody.

Six Baltimore police officers charged in the death of Gray were released from jail on bond late Friday.

Pete Cim­bolic was the twitter user who replied to Shayne’s questions about the plane. Cim­bolic is a North Baltimore resident and former ACLU employee.

“The fact that at any point the government or a contractor for the government could have a wide view or a large picture of what’s going on on block after block of the city is really concerning,” Cimbolic told the Post. “It’s scary.”