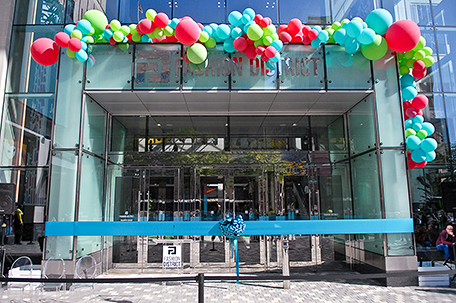 With Fashion District Philadelphia, the owners of the “Mall Formerly Known As The Gallery” hope to attract people to retail through creating experiences.

For Joseph Coradino, the opening of Fashion District Philadelphia is a dream come true.

Coradino, CEO of Fashion District owners PREIT, is a native of South Philadelphia who remembers when his company began the project 16-years-ago. The now 900,000-square-foot space that occupies three city blocks was a dream that he hoped would someday become something his fellow Philadelphians could be proud of.

As he took it all in, the prospect of this section of Market East being a place that people came to on purpose gladdened him.

“With the opening of the District as a new Philadelphia destination, Market East will be revitalized and will emerge as a robust retail and entertainment district in Philadelphia,” Coradino said. “Beyond this, the District will truly redefine the national consumer experience and the future of retail.”

Last Thursday, the Gallery at Market East officially became Fashion District Philadelphia. While two of the stores in the three-story shopping plaza —- Century 21 and Burlington —- have been open for more than a year, the entire space is open for business now. When it’s completely open, it will also include co-working spaces, entertainment venues and other activities.

There’s something for everyone with every budget at Fashion District, said Erika Joy Erb, the marketing director for the Fashion District. From Armani Exchange, which will come to the space later this year, to Zumiez, which is open now, everyone’s budget was kept in mind, she said.

While the Gallery, which had been open since the 1970s, needed a makeover, the landscape for retailing in America has changed a great deal since then. Thanks to web sites like Amazon and services like Stitch Fix, Zulilly, Allume and Nordstrom’s Trunk Show, many people are forgoing that trip to the mall in favor of having their wardrobe choices curated and sent to them.

That’s where places like Candytopia, a candy-themed theme park, and City Winery, a restaurant that’s new to our area, come in. Combined with the AMC Theater, which opens in November, and Round 1, a combination billiards, bowling and karaoke space coming soon, the Fashion District will be able to offer something you can’t get in a traditional mall: experiences, Erb said.

“We’ve been paying attention to the evolution of retail,” she said. “Consumers aren’t looking to just shop, they’re looking for experiences. For example, you have City Winery, which provides live concerts, as well as the AMC Theater and Candytopia. We want to provide something for everyone.”

In addition to all of these attractions, there will be places where you can take selfies with your friends and the co-working space REC Philly, which is tailored to creatives and Industrious, which is geared more to businesses.

The District is also home to $1 million in public art. Thanks to a partnership with the Philadelphia Redevelopment Authority, 3-D sculptures, art installations, murals and other public art adorn the high, light-filled ceilings of the Fashion District.

Also, Conrad Benner, the curator and founder of the Philadelphia Street Art blog, StreetsDept.com, and the District have partnered to put together a flexible mural exhibition featuring 11 local artists and using media ranging from oil paint to crochet yarn.

But while there is national retail in the space, Fashion District Philadelphia is also hoping to help create the next national sensation through nurturing local businesses. The Uniquely Philly section houses four local businesses —- Dolly’s Boutique, South Fellini, American Hats LLC and The Sable Collective —- that have unique offerings designed to pique the interest of locals and tourists alike.

Curated with the help of the Enterprise Center, Uniquely Philly is designed to help these businesses grow through giving them a place to connect with consumers they may not connect with otherwise, Erb said.

The Sable Collective, which sells clothing, jewelry, bags, natural beauty products and sets aside Sundays as “Self Care Sundays”, strives to be that space, said Shanti Mayers, the store’s co-owner/manager.

“We’re honored that we represent what Philadelphia really is,” she said. “It’s important that this is a space where you will feel welcomed.”

The District has played host to Philadelphia Fashion Week this week. On Friday, the Philly Fashion Week Runway 1 show featuring national and international brands will be taking place at 7p.m. On Saturday, the Lov’n My Curves plus-sized fashion show will rock the runway at 1 and will be followed by the Victoria Wright FW19 Fashion Show and Pop-Up shop at 4p.m. and the Made Institute Runway Show at 7p.m., which showcases student designs.

Fashion Week will conclude with the Runway 2 show, also at 7 p.m. Tickets for all shows are available via Eventbrite. Go to www.phillyfashionweek.org for details.

Fashion District Philadelphia is open from 9a.m. to 8a.m. Monday-Saturday and 11a.m. to 6p.m. on Sundays.

A look at Philly Fashion Week for Fall 2017