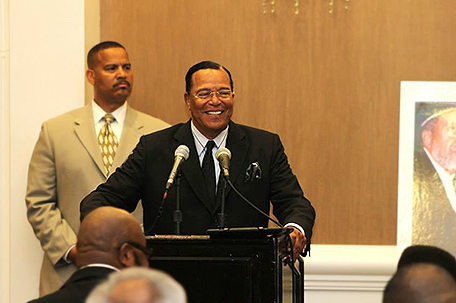 Nation of Islam Minister Louis Farrakhan spoke before a standing room only audience last week to call for a 20th commemoration of the Million Man March to be held on Washington’s National Mall October10.

Farrakhan was hosted by Henry Nicholas, President of 1199C Hospital Worker’s Union, at the union’s headquarters in Center City. More than 150 other union leaders, civic activists and clergymen attended the two- hour meeting, which was closed to media coverage.

Without laying out a specific agenda for the commemorative march this fall, Minister Farrakhan spoke about the need to address the ongoing killing of black men and women by police officers in various parts of the country and the possible launching of national economic boycotts against companies who don’t support job and education programs demanded by African Americans and other people of color.

As he did two decades ago, Nicholas is expected to play a leading role in organizing Philadelphia’s response to the call for a commemorative march. The theme of the October event is “Justice or Else.”