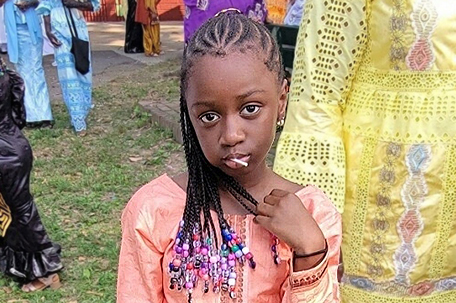 Media, Pennsylvania -Today, three former Sharon Hill police officers Brian Devaney, Sean Dolan, and Devon Smith plead guilty to ten counts of reckless endangerment at the Delaware County Courthouse in Media, PA. Surrounded by family, friends, and community leaders, Fanta’s mother Tenneh Kromah and father Morris Bility watched the hearing which concluded within an hour.  Each count of reckless endangerment carries a two year prison sentence which means the officers could receive up to 20 years in prison. The charges of manslaughter were dropped.

Following the proceedings, family members left the courtroom and Abu Bility, Fanta’s uncle, and Siddiq Kamara, Fanta’s cousin, made the following public statement on behalf of their family:

“Over this past year, the hurt caused by Sharon Hill Borough and its police department has overcome my family with tremendous grief.  The agony we feel constantly re-living the loss of our dear Fanta who was just 8 years old when she was killed by Sharon Hill police officers, is impossible to describe with words.  Since her mother and siblings were witnesses to this tragic incident, they will have to live with that trauma imprinted in their memories for the rest of their lives.

We are still coming to grips with the reality that our beloved Fanta is gone forever.  That is why it is critically important for our family to begin the healing process which cannot happen while this matter remains unresolved. Therefore, After much prayer and discussion with our family, we determined that it was in our best interest for the District Attorney to ensure that the police officers take responsibility for their actions, admit to their reckless conduct endangering many, and killing our Fanta.  We pray that as a result of the police officers being held accountable, we can as a family and as a community, finally have some closure and begin the healing process.

We believe that Sharon Hill Borough is also accountable.  My family still resides in the borough and we know that Sharon Hill officials failed to properly train the officers who used deadly force. We need to ensure all officers are properly trained so no one ever has to experience the horror and tremendous loss and pain that we continue to feel on a daily basis.

We support the District Attorney’s actions in agreeing to these guilty pleas and we humbly ask our friends, community and extended loved ones to respect our decision, and continue to support us as we seek justice and accountability from Sharon Hill Borough.”

Before the hearing ended, Judge Margaret Amoroso scheduled a sentencing hearing on January 12, 2023 at 1:30 PM. She invited both the defense and the family of the victims to provide evidence and testimony to be considered. Amoroso stated that she would be reviewing the sentencing guidelines and taking all information provided by all parties into consideration before rendering her decision on the sentencing of the three officers.