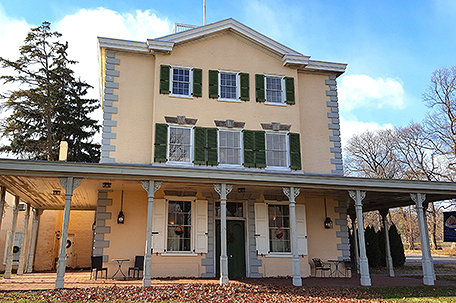 William Penn’s original concept for his 1200-acre “Greene Country Towne,” first published in 1683’s Portraiture of the City of Philadelphia, was both visionary and practical. Realizing that it was destined to be a port and trade center and of necessity filled with structures he planned for five public squares so that residents would always have access to green space. These squares were eventually named after patriots, Franklin, Logan, Penn, and Rittenhouse, Washington and continue to exist. Eighty-acre estates were to be located on the outer edge of the city with mansions built a minimum of 800-ft. apart. Penn, an early environmentalist, recognized the necessity of clean air and water for the maintenance of good health. www.visitphilly.com

Philadelphia’s Water Works was built in 1801 and relocated to Faire Mount, where it remains, in 1815. A formal garden was added to the Water Works in 1829 and would become the original portion of Fairmount Park when it was dedicated 15-years later. In 1854, The Consolidation Act allowed the city to enlarge the park and today Fairmount Park is the largest landscaped municipal park in the nation. www.parkcharms.com

The city has managed to preserve a number of the historic park mansions and they are open for tours and special events and the holiday season is the perfect time to visit. Garden clubs, interior decorators and civic organizations, thematically decorate the homes and costumed docents and activities enhance self-guided tours. This year, six of the mansions have thrown open their doors to invite guests to take a Holiday Home Tour. The homes, Cedar Grove, Laurel Hill, Lemon Hill, Mount Pleasant, Strawberry Mansion and Woodford each have an individual historic allure.

Lemon Hill Estate was the foundation of the park. Henry Pratt purchased it at a sheriff’s sale in 1799 and built a summer home there in 1800. The third-story Federal mansion has many unique aspects including a trio of oval rooms, ornate woodwork and a gracefully curved staircase. Robert Morris, signer of the Declaration of Independence, the original owner, called it The Hills. Pratt renamed it after planting lemon trees. www.lemonhill.org

Cedar Grove was moved to its current site in 1928. A widow, Elizabeth Coates Paschall, was the original owner who built a small stone home in 1748. The house was enlarged over time and the current mansion has three stories, a piazza and a gambrel roof. Highlights of the interior tour are the huge fireplace in the kitchen, original furnishings and the eclectic mixture of architectural styles. At one point the richest man in the city owned the estate. It is open daily, December 26 – January 1, 10 AM – 4 PM. 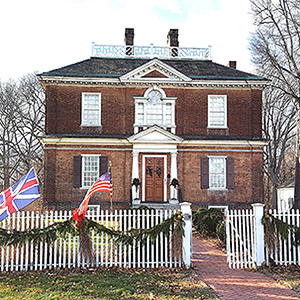 Woodford Mansion is one of the most beautiful of the remaining Georgian mansions. It was constructed in 1756 as a summer retreat and purchased in 1771 by Philadelphia’s British representative. The owners were forced to leave the city after the American Revolution. The Naomi Wood collection of American antiques is showcased on the tour. It is open Tuesdays through Sundays, December 3 – December 31, 10 a.m. – 4 p.m. www.woodfordmansion.org

Benedict Arnold, America’s most famous revolutionary traitor, purchased Mount Pleasant as a wedding gift for his wife Peggy Shippen in 1779 although they never lived there. A pirate and sea captain built the Georgian mansion in 1765 with a view of the waters of the Schuylkill River. The mansion was constructed and furnished with funds the captain obtained while privateering. The house boasts exquisite woodwork, furniture and portraits by both Benjamin West and Charles W. Peale. The estate became part of the park in 1868.

Laurel Hill is the second of the historic homes to be built by a widow. Rebecca Rawls had the two-story Georgian house erected in 1767. The estate was seized during the Revolution because Rebecca’s second husband, Philadelphia Mayor Samuel Shoemaker, was a Loyalist. She repurchased the estate after the war. Holiday Tours are Wednesdays through Sundays, December 3 through December 28, 10 a.m. – 4 p.m. 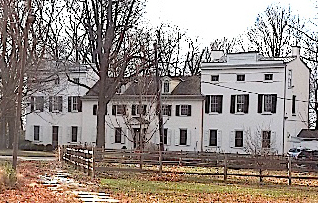 Charles Thompson constructed Somerton, later known as Strawberry Mansion, in 1789. The British torched the home and subsequent owner William Lewis constructed what is now the center portion of the house in 1798. He named the estate Summerville. Lewis, a Quaker, lawyer and abolitionist, penned the first anti-slavery law in colonial America. The mansion, the largest in the park, hosted many of the elite including the Marquis de Lafayette. Highlights of a visit feature The Millennium Doll Collection, a uniquely designed four-door entry hall and stunning French furniture including a round chatting couch. In the mid-1800s, a resident sold strawberries and cream and the house became known as Strawberry Mansion. Holiday hours are Wednesdays through Sundays, December 3 through 31, 10 a.m. – 4 p.m. www.historicstrawberrymansion.org

Belmont Mansion is not open for holiday tours but it has more than earned a mention as a significant historic park home. William Peters constructed the Palladian mansion in 1745 on the crest of what is now Belmont Plateau. His son was the first non-Quaker to join the Pennsylvania Society for the Abolition of Slavery and his grandson worked with the Underground Railroad. The mansion became part of the park system in 1969. The view from Belmont Mansion is not duplicated anywhere else in the city.

Belmont’s history has been interpreted since 2007 through its lens as the Underground Railroad Museum. Public tours and events are regularly scheduled and guests can follow in the footsteps of documented visitors such as Adams, Franklin, Jefferson, Lafayette, Madison and Washington. www.belmontmansion.org

The annual Fairmount Park Holiday Historic House Tour is a wonderful activity to make the season shine even more brightly. Mansions can be toured individually or as a collection. Tours are self-guided and on-site parking is free. Cedar Grove is accessible via Philly PHLASH service using the Zoo Loop. Verify hours, admission fees and dates on the websites. www.holidaysinthepark

I wish you smooth travels and Happy Holidays!!