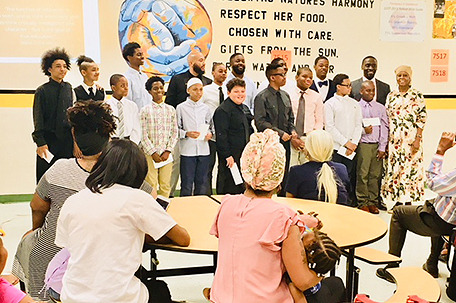 It is Faatimah Gamble’s hope that more young girls gain finesse from the Pearls of Wisdom program. At the same time, she is looking forward to seeing the young males mature through the Boys to Men initiative. So although she was overjoyed with the June closing exercises for the 2017-2018 session of her signature programs, she is looking forward to having even more youngsters enroll in the 2018-2019 session.

Gamble, a certified protocol and etiquette consultant and wife of music mogul and Universal Companies community developer Kenneth Gamble, created the mentoring programs, Pearls of Wisdom and its counterpart From Boys to Men, to teach youngsters about developing and working towards their goals, learning manners and decorum, knowing how to dress in a professional environment and being ready to step into future leadership roles.

Gamble readily admitted that she did not grow up in an environment that taught her these things. 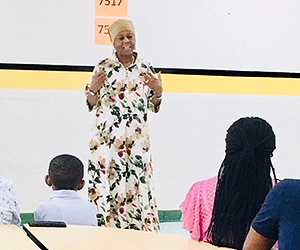 “I grew up in the Richard Allen Projects,” Gamble said. When she attended Bok Vocational School in South Philadelphia, she discovered her acumen for business. She continued her education at Temple University and later became certified as a protocol and etiquette consultant from the International School of Protocol in Washington, D.C.  Gamble vowed then to help her younger counterparts learn about the business world; and that would serve as the foundation for Pearls of Wisdom and From Boys to Men.

Although the students offered extremely articulate presentations and recitations, most came to the program as ordinary youngsters with the usual apprehensions teens have. Some admitted they didn’t want to spend their Saturdays from 9 a.m. to 2 p.m. in a classroom learning about etiquette, diction, and reciting inspirational quotes. But eventually they were won over by trip excursions to Temple and Princeton University campuses, boys’ basketball games, girls’ creative arts workshops, City Hall protest participations, and even a group trip to see “Black Panther.”

“When our program starts, many of the boys come in with an attitude,” said mentor Ameen Akbar, Jr. “Most of them arrive with some resistance at first. They want to push back. Some will say that they do want to be here and they don’t want to dress a certain way. Then as they come you see them change.” 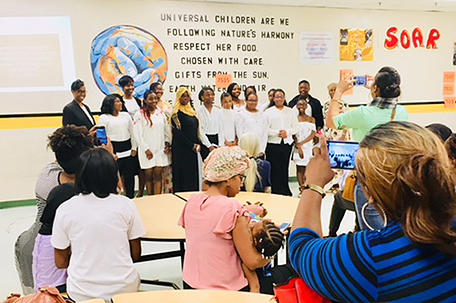 The girls who participated in Pearls of Wisdom (Photo courtesy: Arlene Edmonds)

Another mentor, Garron Gibbs of Mount Airy, agreed. Gibbs, a graduate of the old Ivy Leaf School in Northwest Philadelphia and Howard University, owns a web design company. He said that Brandon Aldrich received the most improved award because he was quietly resistant and defiant when he arrived.

“Many of them are, but after being here their resistance breaks. Others come who are rough around the edges and they also break. This is because we instill in them resilience and serve as role models,” Gibbs said. 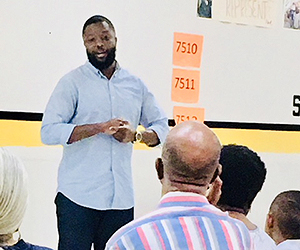 Isaiah Thomas said that they have tested various ice breakers that draw the youngsters in. There are trips to places like Princeton University and having panel discussions with their counterparts from Princeton High. They also play sports or take in a movie together. “They are becoming change agents…who will work on social justice issues,” Thomas said.

The initiatives are sponsored by Universal Companies and The Wellness of You. For more information call 215-732-6518 or visit www.universalcompanies.org.

Mrs. Faatimah Gamble—persuading our men to get real with their health