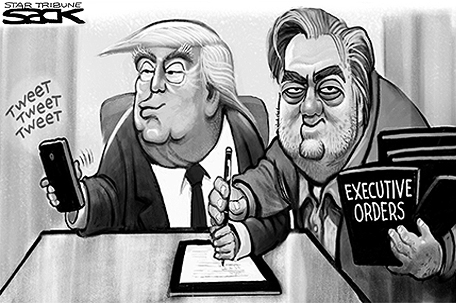 President Donald Trump is just the latest in a long line of elected officials to break out the Executive Order/Presidential Memoranda pen. He may also be the most prolific.

It also led to a lot of people asking, “What is an Executive Order and what are they all about? Are they Constitutional? And can you do something like ban people from seven countries — Yemen, Somalia, Iran, Iraq, Libya, Sudan and Syria — without approval from Congress?”

While Trump admits that he didn’t really discuss the Executive Order creating the “immigrant ban” with many people before signing it, most of these edicts from 1600 Pennsylvania Avenue are joint projects, Bomboy said.

“They’re usually done with guidance from Congress, “he said. “If the President feels that he has a mandate from Congress to do something, he will issue an Executive Order.”

Presidents have been signing Executive Orders since President George Washington became the first person to hold the office. According to the National Archives, President Franklin Delano Roosevelt has signed the most of them (3,721) and President William Henry Harrison, who spent less than a year in office, signed none.

During his eight years in office, President Barack Obama signed 276 Executive Orders. As this story goes to press, President Trump has signed seven Executive Orders and seven Presidential Memorandums since being sworn into office his inauguration.

Presidents have occasionally gotten into trouble for their Executive Orders. For example, during the Korean War in 1950, President Harry S. Truman tried to nationalize the nation’s steel mills when steel workers went on strike. The Supreme Court struck the order down in Youngstown Sheet and Tube v. Sawyer.

Because the president has jurisdiction over the country’s Immigration and Naturalization Act, something the Constitution doesn’t actually address, an Executive Order regarding immigration is within his mandate, Bomboy said. President Obama designated three of these countries — Yemen, Somalia, and Libya — as “countries of concern” and restricted the visas of people who visited these countries in 2016 due to Department of Homeland Security concerns.

But while orders like this are within the President’s purview, the combination of the Executive Order’s execution and its seeming focus on Muslims is most likely why people are taking to the streets…and to the courts, Bomboy said.

“I think that one of the things that caught people by surprise over the weekend is that there was no understanding that implementing this would impact green card holders,” he said. “After 24 hours, the Department of Homeland Security said that it didn’t apply to green card holders. DHS was totally blindsided by this.”

For many of the protestors, the fact that much of this Executive Order was aimed at Muslim countries brought up some First Amendment concerns. Under the First Amendment, Congress can’t restrict speech, freedom of the press, right to assemble and petition the government, and freedom of religion.

But do these freedoms apply to people coming into the country from foreign lands?

“The Constitution applies to you when you’re on American soil or anywhere where we have jurisdiction,” he said. “You don’t have to be a citizen. In the case of the immigration order, green card holders have the same rights as you or I would have. But if you’re applying for a visa from one of these countries, or you’re a refugee seeking asylum, it doesn’t apply.”

Flush with a $24 million war chest gained from donations the organization received when the “immigration ban” was announced, the American Civil Liberties Union is headed back to court to get this Executive Order overturned. The ACLU’s court filings on Saturday night led to both local and national stays of the order.