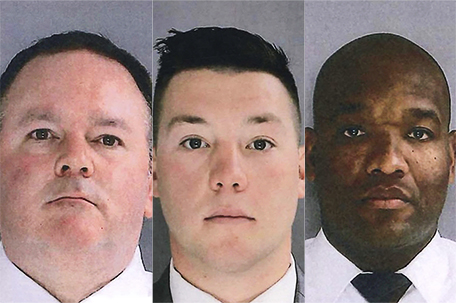 PHILADELPHIA — Three former police officers charged in the fatal shooting of an 8-year-old girl when they fired their weapons in the direction of a crowd outside a high school football game near Philadelphia were held for trial during a hearing last Thursday.

The Philadelphia Inquirer reported that during the crowded hearing, the former officers’ attorneys said the charges were the result of political pressure, calling them “disgusting” and improper.

Bility had attended the game with her mother and older sister and was set to start third grade just a few days later. At a memorial service in August, her family — part of a community of immigrants from Guinea — spoke of a sweet little girl, who smiled and greeted everyone she met.

Investigators say two teens got into an argument and shot at each other outside the football game. At least two gunshots went in the direction of the police officers, who were monitoring the crowd as it left the game, authorities said.

The two teens were initially charged with murder in Bility’s death, but those charges were dropped when the grand jury returned its indictment of the officers.

The officers fired their weapons toward a car they believed was involved in the initial gunfire, striking the car and members of the crowd. Investigators later determined the women in the car were not responsible for the initial gunfire, and using ballistic evidence, found that police weapons were responsible for the shots that killed Bility and struck three of the four other bystanders who were wounded.

Bility’s sister was among those wounded by the officers’ bullets, investigators said.

Its unclear which officer fired the bullet that killed Bility because it was too badly damaged to trace to a specific gun, but investigators testified last Thursday that they were able to trace it to a police-issued handgun. Prosecutors said during the hearing that the officers acted negligently by firing at a moving vehicle.

Investigators previously said Dolan and Smith did not turn on their body cameras, and Devaney was not wearing one during the security detail.