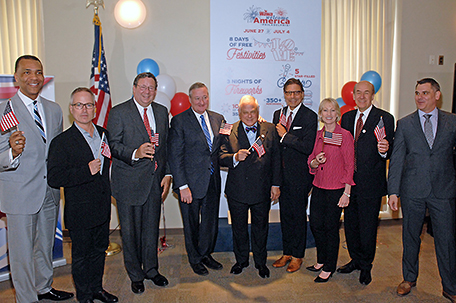 This year’s Wawa Welcome America has some new features and promises to showcase the City of Brotherly Love.

But if you’re hoping for the kind of contemporary big name acts that have taken up musical residence on the Benjamin Franklin Parkway on Fourth of July, you are going to be greatly disappointed.

At a press conference held at the Independence Visitors Center last Friday, Welcome America’s new CEO Jeff Guaracino unveiled a list of activities and sponsors that’s designed to showcase and cement the city’s place as the nation’s premiere place to celebrate the Fourth of July.

“We wanted artists from Philadelphia to shine,” he said. “They’ll be something for everyone from millennials to boomers to love.”

A lot of the things visitors and locals have come to expect from Wawa Welcome America are still in place and have in some cases gotten upgrades.

Robert Irvine, host of Food Network’s “Restaurant Impossible” will be helping the builders of a 5-ton hoagie dish it out and honor the military and first responders during Wawa Hoagie Day on June 30. Free admission will be offered to museums ranging from the National Constitution Center to the Barnes Foundation Museum.

And if you’d like, you can grab another Wawa hoagie to take with you as you check out free movies including ‘Rocky,’ the Ryan Coogler-directed sequel ‘Creed’, ‘National Treasure’ and ‘Finding Nemo’ or checking out free concerts from a variety of performers.

As part of this year’s Go 4th and Learn, which is a chance for young people to have fun while learning something new, Duffy Books In Homes will be giving away 10,000 new books. 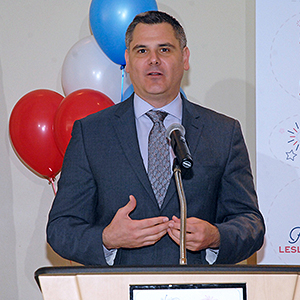 There are also some new things. Mayor Jim Kenney will be presenting a new award, the Philadelphia Magis Award, to an everyday hero. The Wawa Foundation will honor non-profit agencies that contribute to the community with the Hero Award. The event also has a new media partner in Comcast NBCUniversal. Because of this, Welcome America events will be broadcast in English and Spanish on Comcast’s local family of stations including NBC-10, Cozi-TV, Telemundo62, TeleXitos, and TCN and will be available via Xfinity on Demand, Guaracino said.

But the announcement that got to most buzz was the announcement of this year’s Fourth of July concert on the Benjamin Franklin Parkway. After years of bringing concerts filled with contemporary music featuring artists like Philadelphia’s own Jill Scott, Lauryn Hill, Ed Sheeran and Sara Barilles, The Roots, another Philadelphia band, were told by the Kenney Administration that their services were no longer required.

So this year, in an attempt to honor Kenny Gamble, Leon Huff and “The Sound of Philadelphia”, the headliners for this year’s show are: the O’Jays, Harold Melvin’s Blue Notes (Harold Melvin himself has been dead for quite some time), the Intruders with the Urban Guerilla Orchestra, and the Philly Pops.

Also included on the Parkway bill are Yazz the Greatest from “Empire”, Brotherly Love, an acapella group that’s performed for President Barack Obama, and Leslie Odom Jr., who was nominated for a Tony for his role as Aaron Burr in the hit Broadway musical “Hamilton”.

When asked if the concert, which will also begin an hour earlier at 5PM with Kidz Bop, represents a change from the younger, more contemporary acts of years past to a concert geared more toward Baby Boomers, Kenney didn’t disagree.

“I want to pay homage to a sound that made Philadelphia famous and brought us all together as a country,” he said. “It’s an opportunity for parents and grandparents to explain this music to their kids.”

Other performers will be announced in June, Guaracino said.