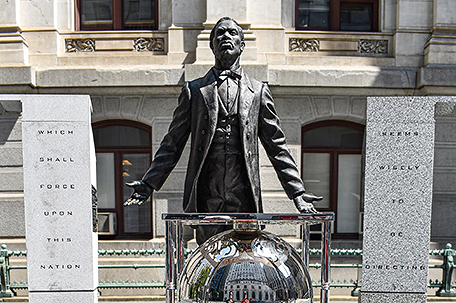 Octavius Valentine Catto is probably best known for his fierce advocacy for civil rights and equality in the military, public transportation, and professional sports during the 19th century.  An educator by profession, Catto also became the foremost Black activist in Pennsylvania when it came to registering African American men to vote and then participate in the first Election Day after the passage of the 15th Amendment in 1871.

On October 10, 2021, The O. V. Catto Voter Empowerment Initiative, in conjunction with the Black Clergy of Philadelphia & Vicinity and Office of Philadelphia City Commissioners will co-host the public Sesquicentennial Commemoration of Catto’s assassination from 2:00 p.m. – 4:00 p.m. The event will take place at the O.V. Catto Statue, located on the Southwest quadrant of the Philadelphia City Hall apron, 1400 John F. Kennedy Boulevard.

“The purpose of this event is to observe the 150th anniversary of the assassination of Octavius Catto,” said Rev. Robert Collier Sr., president of the Black Clergy of Philadelphia and Vicinity. “This will be the first opportunity for Philadelphians to honor our first African American educator, military leader, voting rights activist, community leader and martyr, since the installation of the Catto statue at City Hall.

“As we continue to witness efforts to dismantle voting rights in Pennsylvania and many other states, the Black Clergy of Philadelphia and Vicinity (as an organization) understands our mission is more critical than ever.”

“We must continue to educate our community about the importance of getting registered and then voting on Election Day,” Collier continued. “Without voting, we have no voice. Our organization is proud to stand with the City Commissioners and the O.V. Catto Initiative to keep spreading the message about why we must all register and vote.”

To kick-off the event, Procession Marshall Joe Certaine will lead the Military Color Guard of Honor, conducted by Boy Scout Troop #133, BSA from the historic Saint Thomas African Episcopal Church, which is located at 6361 Lancaster Avenue. Their escorts will be members of the O.V. Catto Elks Lodge #20 (IBPOEW).

In addition to Rev. Collier, Aaron A. Walton, president of Cheyney University, Catherine Hicks, president of the Philadelphia Branch of the NAACP, Gregory Freeman, Exalted Ruler of the O.V. Catto Elks Lodge, #20, and a representative from Pennsylvania Youth Votes will also be speaking.

In the Philadelphia election of 1871, Colonel William B. Mann, a Civil War hero, was running for the office of District Attorney on the Republican ticket. He actively sought the Black vote in Philadelphia to swing a divided electorate to his candidacy. Democrats feared his election, knowing that his intent was to clean up corruption in the city and to enforce equal voting rights.

On the fateful day of the election, October 10, 1871, during this charged and intense period, Catto worked even harder to get out the Black vote, thus gaining more hatred against himself.  Before the day was over, a small group of white men, after passing Catto on a street near his home, turned around and shot him in the back, killing him almost instantly.

Catto was indeed a dedicated civil rights activist, voting rights activist, hero, martyr and so much more. On October 10, 2021, his memory will be celebrated. His work will be lifted. His legacy will live on.

Special Note: All participants are being asked to wear a face mask for health safety purposes. In addition, please be advised that the Broad Street Run is taking place the same day, which means the area around City Hall and throughout downtown Philadelphia may still be congested prior to the commemoration ceremony. For those who drive, parking may be a bit of a challenge. Organizers of this event encourage you to come early in order to find parking, or to consider taking public transportation.

In honor of all the ancestors who were martyrs for Voting Rights, attendees are being asked to wear traditional African attire or white in ceremonial tribute.