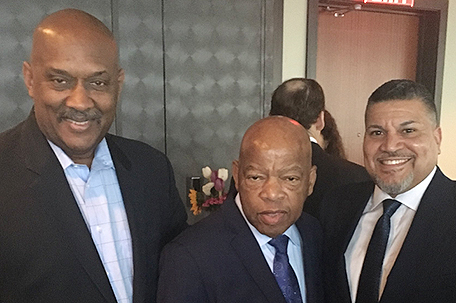 ABOVE PHOTO: It was great to speak alongside colleague and dear friend, Rep. John Lewis, to discuss need for commonsense gun reform with @CeaseFirePA. (Photo: Twitter)

“John Lewis was a true American hero. He has inspired me for decades. He and so many others sacrificed so much for our right to vote. He was not afraid to make what he called ‘good trouble.’

The loss of Congressman Lewis is an enormous one. However, I am grateful that he was able to keep making a difference in our country right through the age of 80. He leaves an example and a legacy for me, for the Congressional Black Caucus, for all members of Congress. We must carry on with his work of civil rights and equal opportunity, including protecting and expanding Social Security, an issue I was honored to work with him on as a colleague on the Ways and Means Committee.

Most of all, we must rededicate ourselves to protecting the right to vote and making use of that hard-won right, a right for which John Lewis and many others sacrificed so much. On the 55th anniversary of Selma, Alabama’s ‘Bloody Sunday’ earlier this year, Congressman Lewis said, ‘I thought I was going to die on this bridge … We cannot give up now. We cannot give in. We must keep the faith, keep our eyes on the prize. We must go out and vote like we never ever voted before.’

“I would like to close with more words from this inspiring hero. Congressman Lewis said, ‘If you’re not hopeful and optimistic, then you just give up. You have to take the long hard look and just believe that if you’re consistent, you will succeed.’”