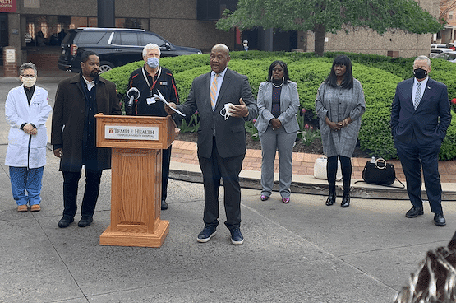 ABOVE PHOTO: Rep. Evans announces the plan at an April 21 press conference as local officials look on. (Photo/dwightevans.com)

Congressman Dwight Evans (D-3rd Dist.) has announced a more than $51 billion, seven-point plan to fight gun violence in Philadelphia and around the country.  He unveiled his plan at Temple University Hospital, which treats many of the city’s gun violence victims, on April 21.

“Over the last two years, Philadelphia and communities across America have suffered from a surge in gun violence – a second epidemic,” Evans said. “This is a national problem – it is not just happening here. I have co-sponsored and voted for legislation in Congress, but I wanted to look for ways to do more. This epidemic of gun violence demands an all-hands response – federal, state, and local government – and more community involvement. We must use all the tools in the toolbox to save lives.”

“I am thankful to Congressman Evans and his ongoing partnership in responding to the gun violence crisis in Philadelphia, said Mayor Jim Kenney. “It is essential that we have allies at all levels of government who are prioritizing gun violence and who will advocate on our behalf in Washington. Gun violence prevention continues to be our administration’s top priority, and the Congressman’s Plan is another step in the right direction towards coordination, not just citywide, but state and nationwide.”

“I support this plan by Congressman Evans,” State Sen. Art Haywood (D- 4th Dist.) said. “We must collaborate to fight gun violence in Philadelphia. We are all accountable.”

“Congressman Evans’ leadership on the prestigious Ways and Means Committee has been invaluable, not only to Temple Health, but to the entire Mid-Atlantic region where he works across the aisle to develop legislative solutions and to bring resources to our region,” Michael Young, CEO, Temple University Health, said. “Throughout his years of public service, Congressman Evans has been a strong partner with Temple University Hospital — which is no surprise, given that his first paid job was working at a hospital. He has also been a fierce advocate for public safety.  Over the past six months, he has worked with hospitals, universities and other research organizations, social services providers, local government agencies, and various other stakeholders to develop solutions to the gun violence epidemic and to make our communities safe and vibrant.”

Encourage use of evidence-based strategies by local law enforcement agencies.

Invest $1 billion in federal funding in local police departments to increase clearance levels for fatal and non-fatal shootings. This would be done through the VICTIM Act that he is co-leading with Congresswoman Val Demings, the former police chief of Orlando, Fla.

Invest $40 billion in employment and workforce development agencies and organizations “Initiatives such as summer youth jobs programs and employment assistance for adults are important in reducing gun violence,” Evans said.

Invest $5 billion in community-based violence intervention initiatives — The House-passed version of the Build Back Better Act that Evans voted for includes this funding.

Increase resources for the federal agencies that can work together to reduce gun violence – the Bureau of Alcohol, Tobacco, Firearms and Explosives (ATF), the Federal Bureau of Investigation (FBI), the Drug Enforcement Administration (DEA) and the U.S. Marshals Service.

Invest $5 billion to reduce blight and improve city environments – “Greening vacant lots, increasing the number of streetlights, and providing a grant program for low-income homeowners to make housing repairs have all been shown to reduce gun violence,” Evans said.

Increase coordination and collaboration of federal, state, and local agencies and organizations – “Organizations and agencies often work in silos, even if they provide similar services. the Hub model was created in Canada and has been adapted for use in Philadelphia. However, for this model to work most effectively, it needs the buy-in and participation of all relevant agencies and organizations, as well as more avenues for funding to increase personnel,” Evans said.

The plan is available online at: www.evans.house.gov.