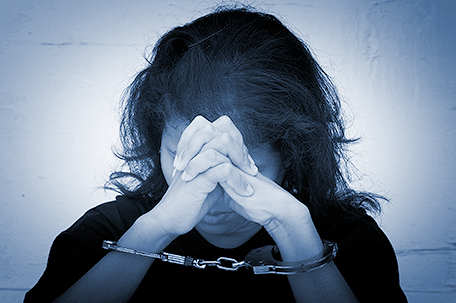 A 16-year old girl arrives in the hospital emergency room doubled over because she can barely walk. She arrived with no identification, only giving her first name. She appears to be drugged. Her clothing is soiled and odorous. She is in pain, tears streaming down her face. She is another victim of local human trafficking.

In Philadelphia, African-American girls and women involved in human trafficking often wind up on two different doorsteps. Those who are ready to get out of “the life” show up at Enon Tabernacle Baptist Church’s Women’s Drop-In Center. Those who have contracted a sexually transmitted disease are required to report to a hospital emergency room. Perhaps no one knows this routine better than Francina Pendergrass, a member of Enon’s “She’s My Sister” ministry and a forensic nurse in Camden.

So, the third part of the Philadelphia Sunday SUN’s series on human trafficking is an exclusive interview with Pendergrass. As many are celebrating Women’s History Month, Pendergrass was helping this 16-year old trafficking victim, who never had a “Sweet 16” party.  It was clear that she had been told not to confide in the staff, and not to seek help from any official. Instead, she is a sex slave in the hospital to get treated so she could get back to work.

“It took three persons talking to her to get her to be receptive,” Pendergrass said. “I see them all the time come in, fearful of saying anything. It is clear they have been abused and taught not to trust anyone in law enforcement or health care worker. She was scared.

After I brought her some new clothes, a few toiletries and Twizzlers, she opened up. She was so happy to put on clean clothes and eat candy. We were able to connect her with an organization that could help her. I see girls like her all the time, including those from Philadelphia and Camden, who need help.”

Pendergrass also sees the girls who are rescued from human trafficking from the Camden area. They are not unlike the young ladies who were removed from a recent raid in Germantown as part of the FBI’s “Operation Cross Country X” crackdown. Ellyn Jo Waller–the first lady of Enon and founder of the “She’s My Sister” ministry–was kept abreast of the local raid.

There were 25 children rescued from a house on Chew Avenue earlier this month. There were also some 20 “pimps” and their associates arrested during the Delaware Valley raid that went into suburban communities like Upper Merion as well, part of this federal raid of trafficking houses in several major cities. In total, 82 children were rescued and 250 arrests were made during this operation.

“Many of these girls become trafficked because they are tricked into it,” Waller said. She stated that they may often be coerced by lures of becoming a model, doing a music video, or securing other employment.

Pendergrass has heard the same story lines as well. That is why Enon’s “She’s My Sister” ministry is a stellar initiative, she said. Not only do they operate a drop-in center for girls and women in “the life,” but they also provide workshops and other programs that address the perils of the sex slavery market and that look beyond the typical stereotypes of trafficked victims.

For Pendergrass, working with human trafficking victims is her calling. She believes this because otherwise she would be drained. After working in social services and general nursing, she saw that there was a need for quality forensic nurses. That’s why 11 years ago, she made a life commitment to work with this population. She has treated more than 500 girls and young women who are being trafficked in her practice.

“Most of the trafficking victims that come to be entered trafficking when they were between 12 and 15,” Pendergrass said. “No girl that age can make a decision to live this life. The frontal lobe of their brain is not even developed. None of them ever said when I grow up I want to be prostituted or make my living by trafficking.

Not all of them come from homes where there was domestic violence or anything we think of as dysfunctional. In fact, a few enter it at college age from white collar intact families. Some are students trying to make extra money. All these girls eventually wind up in an emergency room drug addicted, having a sexually transmitted disease, or in need of immediate medical care,” she said.

Pendergrass added that there needs to be more community awareness so that one is addressing the problem from “the front end” before one becomes trafficked rather than trying to get them out of the lifestyle. This can be achieved by alerting people that there are predators ready take young girls into this illegal lifestyle right in their midst.

“There are women who get men to pay their bills in exchange for sex,” Pendergrass said. “Sometimes these women will teach their daughters if they want a little change this is what they can do. They are not intending for their child to be trafficked. But, this can happen. The child is so devastated when I see them because they never thought their life would turn out this way.” 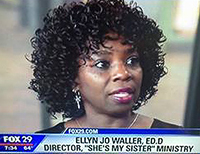 Ellyn Jo Waller appeared recently on Fox 29 to call attention to the seriousness of human trafficking and to talk about Enon’s ‘She’s My Sister” ministry to help end the trafficking. (Video screen grab: Facebook)

Pendergrass said that there needs to be more community awareness so that one is addressing the problem from “the front end” before one becomes trafficked, rather than trying to get them out of the lifestyle. This can be achieved by alerting ordinary people that there are predators ready take young girls into this illegal lifestyle.

Over at Enon, Rev. Alyn Waller, the church’s senior pastor, held a service where all the men present were asked to pray for the young girls. He said particularly singled out the girls who were growing up in fatherless households.

“We have to be open with men and call them out to understand what their role is in this,” Pendergrass said. “We live in a world where pornography and sex is everywhere. They have to understand how all this affects them and the changes they have to make personally and in helping mentor young men to do the same. After all, if there is no market for these services, there would be no sex trafficking.”

Pendergrass is optimistic about the many partnerships of the “She’s My Sister” ministry, including joining with The Salvation Army’s New Day Women’s Drop-in Center. Together Enon and the Salvation Army are providing transitional services for trafficking victims who want to have a fresh start.

This is an outgrowth of the ministry’s forums in held at Enon’s Mount Airy campus on Cheltenham Avenue in early 2016 and again earlier this year. At both events, Pendergrass was on hand to share her experiences working with trafficking victims and show graphic videos about women who get forensic examinations.

“Francine Pendergrass and I facilitated a workshop about the resources for those who are victims of human trafficking,” said Judge Lori Dumas at one of the events. “She is a forensic nurse, and I work for the courts. We want people to know that one does not have to remain a victim…that one can leave and can start life again.”

Salvation Army workshop facilitators shared that the U. S. Department of Justice awarded their initiative a $500,000 grant to expand the program. There was a volunteer sign up table at Enon recently. Those who manned the table explained the Sanctuary Model for trauma includes SELF, an acronym for safety, emotions, loss and future.

Pendergrass, too, sees a need for even more centers. Since she works in New Jersey, she has already secured a Camden property to serve as a drop-in center there. She said that it will provide assistance with legal proceedings to helping the trafficking victims start new lives.

For more information about Enon Tabernacle Baptist Church’s Women’s Drop-In Center, visit: www.enontab.org or contact the church office at 215-276-7200. Callers will then be directed where to leave their contact information.

The Salvation Army’s New Day Women’s Drop-In Center is located at 2659 Kensington Ave. Their hours are Monday to Thursday from 11 a.m. to 5 p.m., and Wednesday and Thursday from 9 p.m. to midnight. For more information, call 267-886-8395 or email them at [email protected]