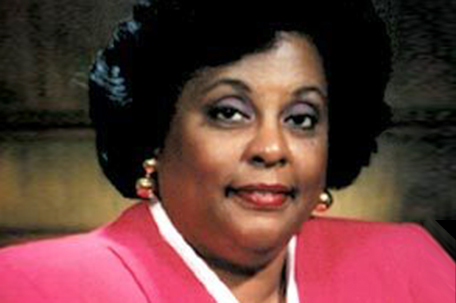 It is with heavy hearts that the family of Emma C. Chappell and leadership of the Black Women’s Leadership Council announces the passing of Emma C. Chappell on Tuesday, March 16, 2021.  As founder and CEO of United Bank of Philadelphia, Emma was a visionary.  The first African American woman to establish a commercial bank in the United States, Emma accomplished many firsts.

She was the first African American vice president of a major bank in Pennsylvania, the first African American vice president of Continental Bank, and granted more than $30 million in loans to Black enterprises. Emma also organized the Model Cities Business and Commercial Project known today as Philadelphia Commercial Development Project, which revitalized commerce in the city. She served on numerous political, civic, and non-profit campaigns to support women, minorities, and the community, and championed community banking as a means to change the trajectory for people of color by establishing the pathway for businesses owned and operated by people of color to achieve their hopes and dreams.

A friend to numerous United States presidents, and influential in the workings of party politics, Emma will always be remembered for her leadership, advocacy, and business acumen giving voice to social justice, racial and gender equality, and creating change.  She never shrank from a worthy battle as she continued to work using the radio airwaves, leadership as co-convener for the Women’s Leadership Council along with other civic organizations to exemplify her strong Christian faith and commitment to service.

Arrangements to celebrate her life and legacy will be announced at a later date.

Emma Chappell, founder of United Bank of Philadelphia, dies at 80