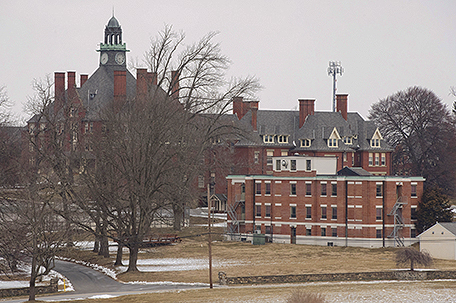 ABOVE PHOTO: The Glen Mills Schools in Glen Mills, Pa., is shown Thursday, March 7, 2019. Pennsylvania Gov. Tom Wolf has ordered a review of abuse complaints against a suburban Philadelphia reform school. Lawmakers and children’s advocates on Wednesday called for the state to launch an investigation into allegations of child abuse and cover-ups at the schools. (AP Photo/Matt Rourke)

State officials have ordered the removal of all children remaining in the oldest reform school in the country in the wake of a newspaper investigation detailing decades of alleged abuse and cover-ups at the Pennsylvania campus.

The Department of Human Services said the “emergency removal” ordered Monday means all children residing at Glen Mills Schools in Delaware County will be relocated “as soon as this can be safely accomplished.”

At the time of the order, there were 64 students at Glen Mills, 21 from Pennsylvania and 43 from eight other states, officials said. Counties, states and judicial systems with children at the school about 25 miles west of Philadelphia were notified earlier about the order, which also bars any new admissions, the department said.

“As the investigation into allegations raised in recent reporting continues, we must do what is necessary to ensure that no more children are at risk of physical and emotional harm,” said DHS Secretary Teresa Miller said. “This removal is one step of an ongoing process, and DHS is committed to seeing this investigation through to ensure that any individual responsible for endangering the welfare of children and coercing silence can be held responsible.”

Miller urged any former students, families or staff with information to come forward so officials can “understand the full scope of incidents and mistreatment that occurred at this school.”

Gov. Tom Wolf earlier this month ordered a review of allegations of abuse, a spokesman saying he was “deeply disturbed” by the reports.

The Philadelphia Inquirer investigation published last month described a culture of physical abuse at the school and alleged that school leaders turned a blind eye to beatings and failed to vet or train counselors. In the last five years, at least 13 staffers at Glen Mills have been fired and dozens more have been retrained or reprimanded over assaults on 15 students at the school, the newspaper reported.

A school representative told the Inquirer Monday that officials were “assessing the situation and its impacts and will continue to work with all state and local officials.” Officials said earlier they took the allegations very seriously and had “zero-tolerance for violent behaviors against students.”

Glen Mills, established in 1826 as the Philadelphia House of Refuge, noted that it is regulated and licensed each year, and their earlier statement said the staff deals with extremely challenging young people and they are trained in handling potentially violent behaviors.