Edna Wooden honored on the occasion of her 100th birthday 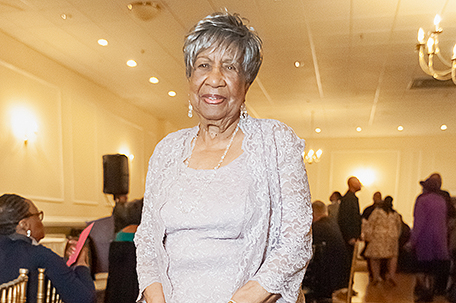 Longtime Philadelphia resident Edna Wooden was recently honored on the occasion of her 100th birthday, which was January 27. The special celebration took place on Saturday, January 25 at the Oaks Ballroom in Glenolden, Pennsylvania.

She is very grateful that she is blessed with a rich and full life and says that her secret to longevity is to keep moving.

Edna was born and raised in Philadelphia. After graduating from Gratz High School, she attended night school and earned a certificate in dressmaking. She later developed skills in ceramics, crocheting, macramé and knitting.

Edna was baptized in 1933 by the Rev. William Gray, Jr. at Bright Hope Baptist Church.

In the early 1950s, Edna met and married Elijah Wooden.

After retiring from the Sonex Corporation after 35 years, Edna traveled extensively, covering five continents — North and South America, Europe, Africa and Asia, as well as many Caribbean Islands.

Edna served as a dedicated poll worker for more than 40 years in the 11th   Ward before moving to a senior apartment .

At her new home, she soon joined the knitting club and began knitting blankets and throws for nursing homes. She is also an active member of the Martin Luther King, Jr. Senior Center.