Editorial : The surge of Philly violence: We can run, but we can’t escape it. Talking ad nauseum about it isn’t working, and more people are dying. 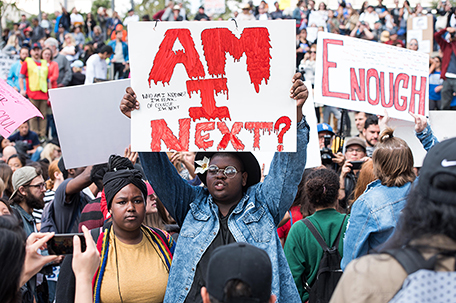 I cancelled my Facebook news feed for the New York Post. Most of the stories were horrific and only about death. The last straw was the article on June 14, about marauding young predators who were convicted of first-degree murder of a 15-year-old boy who they mercilessly butchered with machetes – mistaking him for a rival gang member.

Reading about it made my chest hurt.

A video of the massacre was played in court, and the mother of the boy helplessly watched her baby killed while she cried and screamed. My heart went out to that poor woman.

That was enough for me.

Last Father’s Day weekend was filled with shootings, involving people going about their day-to-day tasks, just living life. A woman and her boyfriend get into an argument with someone in a neighborhood deli who pulls a gun and starts spraying bullets. She is shot in the head and killed – five children are without a mother; several others are wounded in the altercation.

It’s graduation time – a party is held in a secluded part of a park in Southwest Philly. Suddenly a stranger appears out of nowhere and starts shooting. In the aftermath, one man is dead and five people are wounded. No suspect has been found yet.

As I’m writing this, I’m waiting for my 18-year-old Zachary to come in from work.  When he does, I silently thank God.  My oldest son has been home for a few hours and my husband is off today, my family is whole and at home. I stay in constant prayer for their safety and the safety of my friends, colleagues, and the rest of my relatives.

I’ve been feeling unsafe in Philadelphia for some years now..  And while my family lives a quiet life, we haven’t been untouched by violence.

My 24-year-old son Nicholas was attacked by roving teens on his way home from work a few years ago. Fortunately, a police car rolled up on the incident and the boys scattered. The officers took him to the hospital, where he called me from to tell me what happened. Thankfully he hadn’t sustained any life-threatening injuries, but he was furious! They never caught the boys involved.

My husband’s cousin was murdered years ago. He didn’t even reach his 25th birthday.

Law enforcement and the politicians spout the same spiel; what they’re going to do, (for the time being), and what needs to happen – blah, blah, blah. The mayor and police commissioner are under fire by the legislature to get things under control, because the city is in crisis mode – again.

Meanwhile, people are imploding, using guns as the last word in the simplest of conflicts.

In what was a close call the other week, my Uber driver got into an altercation with an idiot who didn’t want to wait a minute for me to get into the car. I’m glad no one had a gun in this situation, because the fool who started the argument used his van to butt into the back of the car, then ran to the front of the car to spit in the front seat in retaliation. Suppose he had a gun? He probably would have shot my driver; he was just that irate and crazy.

Are we becoming numb to the violence? Why is it that we protest only when it affects us directly?

According to the Associated Press, “the homicide count in Philadelphia before Monday stood at 152, 13% higher than at the same point last year. Philadelphia recorded 349 homicides in 2018, the highest number in over a decade.”

So, no more talking, please. I want to see visible action; legislation to reduce the number of guns in the street, and more of a police presence in the streets consistently.

These are a couple of solutions, but there is another ‘elephant in the room’ most politicos don’t want to address that is contributing to the crime that’s mostly affecting low-income areas… gentrification.

Building up certain pockets of the city while allowing other areas to rot is devastating to all of Philadelphia. The 1% does not make up a city by itself; and cannot create a great city.  It needs ALL of its citizens and a strong working class for that.

In his Monday, June 18 column for Philadelphia Magazine, writer Ernest Owens nails it when he suggests that the poverty needs to be addressed, “The virtual absence of homicides in Rittenhouse Square or Chestnut Hill isn’t because the residents there are better people, but because they live in neighborhoods afforded the opportunity to thrive. You strip any community of decent public education, jobs, and healthcare access, and any one of them — Black or White — will start to crumble.”

Philly’s poor and working class yet again are being pushed to side and outpriced out of the neighborhoods they’ve lived in for years; property taxes skyrocket and homeowners can’t keep up with the payments. Some lose their homes to liens. This creates anger, resentment and desperation and allows the unsavory element in.

And don’t think that the violence will only stay in the low-income areas.  The ‘wealthy’ areas of Philadelphia will be affected too eventually. What affects one, will affect all; even the rich.

Those with money may run, but they can’t hide. Gun violence is a cancer that will continue to spread through all of Philadelphia. We need to work together with the powers that be to prevent it.