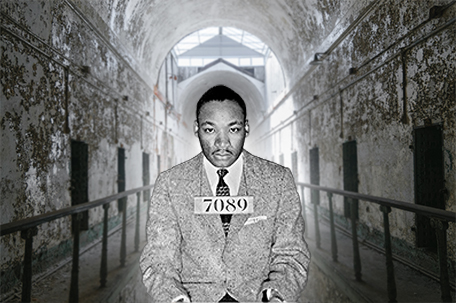 “Dr. King’s extraordinary letter has never been more relevant,” says Sean Kelley, director of interpretation and public Programming for Eastern State Penitentiary. “Dr. King taught us that civil disobedience was essential to the Civil Rights Movement. When this highly educated and prominent man chose to spend time in jails, it forced many Americans to confront not just the racism of individual behavior, but the immorality and oppression in the nation’s legal system as well. We look forward to an open and frank discussion about Dr. King’s actions in light of the ongoing controversy around our nation.”

Readings and Discussions on Saturday, Sunday, and Monday:

Professional actors, youth readers, and community leaders read excerpts from King’s letter three times a day on Saturday, Sunday, and Monday at 11:30 a.m., 1:30 p.m., and 3:30 p.m. An informal Q&A moderated by a civil rights scholar follows each reading, giving visitors an opportunity to respond to the letter’s relevance today. The readings are free and open to the public. No reservations required.

The historic site invites children ages 7-12 and their families to create art in response to themes found in the letter, and read stories about Dr. King’s life and legacy. Family activities are available on Monday, January 21, free and open to the public. No reservations required.

In partnership with PAR-Recycle Works, the historic site encourages the public to recycle old electronics from 10:00 a.m. to 2:00 p.m. on Monday, January 21. The following items are accepted: laptops, desktops, tablets, printers, scanners, fax machines, cell phones, flat-screen TVs, flat-screen monitors, keyboards, iPods, MP3 players, Fitbits, VCRs, DVD players, cords, game systems, remotes, and other small electronics. All computer drives will be wiped clean. CRT TVs, CRT monitors, and projection screens are not accepted. The electronics recycling station is located near the penitentiary’s entrance on Fairmount Avenue so that all community members, including those not interested in visiting the penitentiary, can easily recycle their items.

PAR-Recycle Works is a nonprofit that provides transitional employment to people returning to the community from prison through an environmentally responsible electronics recycling service. Serving municipalities, townships, universities, businesses, faith-based organizations and other major institutions, PAR-Recycle Works takes apart computers and other electronics and recycles them into valuable components that are sold to generate revenue to pay employees. By providing employees with skills and opportunities, PAR-Recycle Works helps to build safer communities and contribute to stronger families while saving taxpayer money.

About “Letter from Birmingham Jail”:

Martin Luther King, Jr. was arrested in Birmingham, Alabama on April 12, 1963 for demonstrating without a permit. During his 11 days in jail there, he wrote “Letter from Birmingham Jail” in response to a letter published by Alabama clergymen that criticized King’s use of jail time to demonstrate civil injustice.

In the letter, Dr. King explains why he chose to use prisons as a tool in his Civil Rights Movement. He wrote, “I submit that an individual who breaks the law that conscience tells him is unjust, and willingly accepts the penalty by staying in jail in order to arouse the conscience of the community over its injustice, is in reality expressing the very highest respect for the law.”

The writing of the letter itself involved rule breaking. Prisoners were not allowed instruments to write during this time, so Dr. King’s lawyer snuck in a pencil. The letter was written in the margins of a newspaper and smuggled back out by the same lawyer. The letter became a manifesto for civil disobedience, stating, “Injustice anywhere is a threat to justice everywhere.” The letter led to a pivotal moment in the Civil Rights Movement when, about a month after it was published, Birmingham officials agreed to desegregate schools, restaurants, and stores.