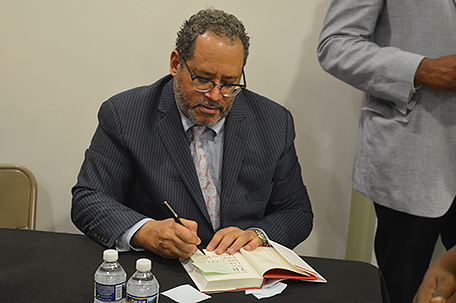 Dr. Michael Eric Dyson felt that the best way to culminate his Philadelphia “What Truth Sounds Like” book tour was to speak before an audience of young people. So, while he began his tour in Germantown giving a lecture at Enon Tabernacle Baptist Church West, that is not where his trek ended.

Last Sunday morning found him instead at the Scholarship Announcement Worship Service, which was held at Enon’s East campus in Mount Airy. Most of the more than 100 recent graduates had just completed elementary, middle or high school. There were a few receiving higher education degrees as well.

In an exclusive interview, Dyson said that he hoped that the graduates and other congregants walked away with a clearer understanding of how to navigate the many narratives they hear, especially in the media. He pointed to the year 1619, where the financiers at Jamestown had their own version of the story that was unfolding.

“Then there was the alternative narrative,” Dyson said. “Black folks did not have the narrative that they were less intelligent, not capable.” 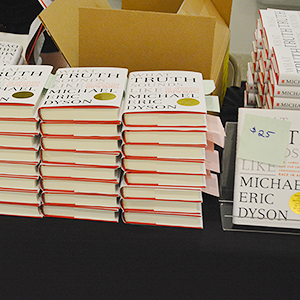 Dyson stressed the importance of discerning the difference between real and fake narratives.

Citing the news reports that unemployment is down in the United States,  he explained that there are things not being said, like the fact that Black unemployment is double that of White unemployment, or that some have stopped seeking employment at all and are not counted in those statistics.

However, Dyson is optimistic that millennials can lead the way in setting the narratives straight. He said that they will do this with their technological savvy, social media skills and global perspective.  He also charged the young people present, to never negate the wisdom and knowledge of their elders.

“We have to help them to dig deep into their history,” Dyson said.

He singled out the Enon West church as an example one can look up to. Although both Enon congregations are intergenerational, many at the Germantown campus have been members of the church before the new campus was built.

“It is important to hand down the knowledge, because the young people are hungry and curious,” Dyson said.

Usually when Dyson lectures at a church, the sanctuary may be full, but he will only sell a handful of books. This was not the case at Enon, he said. Even at the church’s Germantown campus, which is smaller, he easily sells 50 books and he will often sell much more at the Cheltenham Avenue campus.

“Philadelphians are very literate and hungry for knowledge. I sell many more books here than anywhere else,” Dyson said.

Perhaps no one was more pleased with Dyson’s presence at the church than the Reverend Kevin H. Murphy, Enon’s associate pastor of missions.  He coordinated the Graduates Recognition Worship Service on June 9th and the Scholarship Worship service on June 10th.

“This is about recognizing the academic achievements of our young people at Enon,” Murphy said. “We (challenged) them to do their best because we understand that some need help. Some are under financial strain as they go to college. But, we wanted to recognize those who achieved, who kept their GPA high.”

“Michael Eric Dyson was chosen by Pastor (Alyn) Waller because he is a tremendous inspiration to young people,” Murphy continued. “We wanted them to see an African-American intellectual up close. We wanted to show them that as students they can be intellectuals in the making without losing who they are. After hearing him they can see how and why that is possible.”

Waller agreed. He said that the entire weekend was geared towards honoring academic achievement. He pointed out that as the students embark on their higher education he wanted them to be exposed to an academic scholar who they could emulate.

“We have here a great authority with his new book. As we hear all the controversies about denying access, a book like this is necessary for these times,” Waller said.