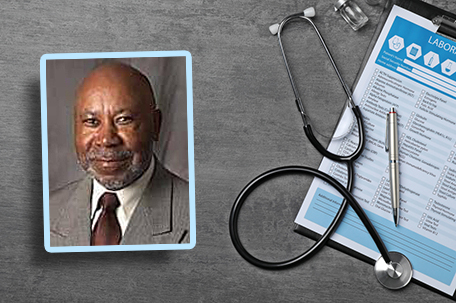 Fast-forward to 2020 and he is “hanging up his shield,” so to speak, as a distinguished doctor serving the Delaware Valley community.

Just a stone’s throw from where he grew up in West Oak Lane, Williams, a native of Albany, Georgia, opened up his private practice two years after serving in the Navy. He specialized in diseases of the bladder, kidney and urinary tract.

Applying at Albert Einstein Hospital, Williams was first told there were already plenty of urologists in the city. “There is always room for a good urologist,” was his reply. Einstein Hospital, located at Broad and Olney and Misericordia Hospital in West Philadelphia became his referring facilities for the next 38 years.

An Olney High School graduate and star athlete, Williams went on to receive his college credits from the Community College of Philadelphia. He then continued on to Temple University, where he earned a pharmacy degree in 1971.

A dental scholarship took Williams to the University of Connecticut School of Medicine and Dentistry in Farmington, Connecticut. After his second summer rotation, he answered the call to transfer to their medical school division. In 1975,  upon his graduation, he received the Outstanding Research Award for work in lead poisoning in children in the inner cities.

Williams trained in general surgery at Hartford Hospital and was the first Black medical intern in the hospital’s 96-year history. He continued his surgical training at Yale University in New Haven, Connecticut, serving as chief urology resident and instructor from 1979-80.

Currently a physician at MidLantic Urology in Philadelphia, Williams has made his main focus the prevention of prostate cancer in the local Black population. Over the years he has spoken at many area churches, served on numerous panel discussions, and participated in radio shows on the topic.

“Black men don’t just get this disease more often than White men. They tend to get it at an earlier age. And their cancer tends to spread more quickly,” Dr. Williams tells his audiences. “Early detection, lifestyle, habit changes, and finding a doctor you can trust” all play a part in lowering the incidence and death rate in our people.”

Williams has been recognized by numerous organizations for his civic work. Most recently in 2017, he was honored by the Spectrum Health Services, as a “community gem” for his outstanding service.

A member of several professional organizations, Williams is currently active as a foundation member of Sigma Pi Phi Fraternity, Delta Epsilon Chapter in southern New Jersey. A member of Second Baptist Church in Moorestown, New Jersey, he has been married for 50 years to Dr. Gwen Gay Williams. Together they have two caring children, Leah and Jamison Williams.

Williams leaves a void in the arena of Black physicians. He is only one of two Black urologists in the city. Within the last 40 years, the number of new African American physicians has not kept pace with the population in general, or the number of those in training. His services and dedication will be missed.