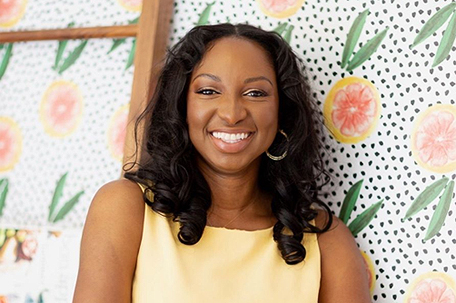 Crystal Allen is a gregarious 33-year-old, who literally could not see when she met Major. Before she turned 18, she had no eye problems whatsoever. She was working for an organization called City Year, when she began noticing that her vision was getting blurry. She attributed it to being in front of a computer all the time.

By the time she was 19, Allen went from seeing clearly to not being able to see at all. She could only see shapes and colors of things, and alarmed her mother one day, when she told her she was watching a particular station while sitting in front of the television and it was clearly wrong.

She went to an eye institute and spent six hours getting tested and was diagnosed six months later with keratoconus, the same disease that Kahliya Robinson, a patient whose story was shared in part one of this story, had. She went to several institutes to no avail, and it was the bishop in her church, who told her about Major, 12 long years after being first diagnosed.

Allen was at the point of almost hopelessness because no one had been able to help her.

“I was too blind to get and keep a job, and not blind enough for social security,” she said.

All of this was happening in the prime years of her life, with children she had to take care of.  Allen decided she would have the cornea transplant surgery as a last resort. She went through all the testing and two days before the surgery, the team called her and suddenly canceled. She was so hurt. A few days later, she met Major who told her it was fortuitous that she did NOT have the surgery, because she would have been completely blind. Major could still see scar tissue on Allen’s eye where her daughter accidentally hit her several years before, which meant that the cornea transplant could have caused more harm than good.

When Major informed Allen that she had a way to make her see again, Allen did not believe her. However, she decided to trust the doctor, followed her directions, and over time, she too was fitted with the same type of lens Robinson was given.

The day Allen went into the office to be fitted with her special lens, she burst into tears, ran into the waiting area, and said to her mother, “I can SEE, Mommy!” All the patients waiting to be seen began to cry with her. Her mother went from a shape she knew, to someone she could see fully. The joy in the Eye Innovations office that day is an experience they will always remember.

Allen is now learning how to drive, so she can finally have her own car.

“I look at life differently now — I appreciate being able to see everything so much, I pay more attention to the details like the moon,” Allen said.

Allen is an active reader who previously had to awaken to her right eye at the age of 30 being completely white; she was totally blind in that eye. At 33, she now can see through both eyes. Without her specially made contacts, she would be legally blind.

“Go to Dr. Major; if they can’t fix you, she can,” Allen said. “She even told me that milkshakes messes with my vision. I had to give those up.”

The look of pure appreciation that Allen has for Major, is priceless. She is on a journey to a much healthier way of life, thanks to the woman who told her she could see when others gave up on her being ever able to see again.

According to Major’s colleague Debra Smith, one of the most heartwarming incidents she has witnessed at the office was when there was a baby who came in that was not walking or crawling; she just laid there.

Major looked into the baby’s eyes, created special lenses for the little girl, and she got up and walked out of the office that she could not walk into.

Quite simply, says Smith, Major is a miracle worker to anyone who encounters her.

I could not agree more.

Dr. Archima Major: Saving lives through our eyes (Part One)

How Medicare covers your eyes