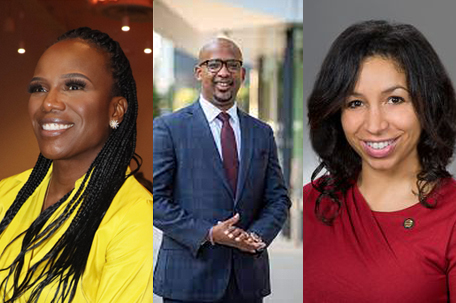 Philadelphia’s Dr. Ala Stanford has been tapped by President Joe Biden to head the Region 3 division of the Department of Health and Human Services (HHS).

In addition to Stanford, the president has appointed Antrell Tyson as director for Region 4 and Janine Boyd, as director of Region 5.

Stanford, a practicing physician for over 20 years, is board certified by the American Board of Surgery in both pediatric and adult general surgery and is a health care advocate. She  is  the  founder  of The  Black  Doctors

COVID-19  Consortium  (BDCC). The consortium was formed in response to the disproportionate number of African Americans being diagnosed and dying from coronavirus in Philadelphia and the lack of swift intervention to mitigate disease spread. The mission of the consortium is to educate, provide advocacy and barrier-free coronavirus testing and coronavirus vaccination in an effort to decrease the morbidity and mortality associated with the disease. Her research in basic science, clinical research, and public health has been published in peer-reviewed medical journals. Stanford also serves as a medical correspondent for local and national news outlets. She is the former director of the Center for Minority Health and Health Disparities of Temple University School of Medicine and serves on the CDC Philadelphia Department of Public Health COVID-19 Vaccine Advisory Committee. Stanford has received many accolades, notably being named a 2021 Top 10 CNN Hero and 2021 George H.W. Bush Points of Light Award recipient.

Tyson previously served as the director of business services and policy for the city of Atlanta’s Workforce Development Agency. In this role, Tyson re-established the city’s federally-funded work-based training programs to help build a highly skilled and responsive workforce. Additionally, Tyson served as the agency’s top legal advisor to ensure the agency’s compliance with local, state, and federal laws and regulations. Tyson previously served as the District Director for Representative Lucy McBath (D-Ga.). As McBath’s’ top district advisor, Tyson oversaw the daily operations of the district office. Tyson also helped to advance many of the congresswoman’s policy priorities, including expanding access to affordable healthcare, lowering prescription drug costs, and decreasing maternal mortality rates.

Tyson laid a strong foundation as a public policy professional while working on and off Capitol Hill in Washington, D.C. He has served as Counsel for a Member of Congress and a U.S. Senate committee, as well as Assistant General Counsel for the National Association of Broadcasters. Tyson holds a Bachelor of Arts in Political Science from Colgate University and a Juris Doctor from the T.C. Williams School of Law at the University of Richmond. He is a native of Decatur, Georgia, and resides in Atlanta with his wife Laurie and their son Dorian.

Boyd is a pediatric speech and language pathologist turned advocate and state legislator. With almost two decades of experience in health and human services advocacy and policy as a government affairs professional, Boyd has been actively involved in Ohio’s state budget process and identifying federal opportunities on behalf of programs that serve the most vulnerable citizens. Through her experience with the state legislative process, Boyd has been an advocate for change in Columbus and has developed strong working relationships with agency directors, statewide elected officials, and lawmakers from all backgrounds and political parties. As a former Cleveland Heights council member, Boyd worked to establish a mentoring and juvenile diversion program and catalyzed the expansion of human rights laws to increase protections for members of the LGBT+ community.

In Ohio’s Legislature, Boyd served as ranking minority member on the House Health Committee, as well as the Committee on Community and Family Advancement, among other committees. Boyd co-founded the first statewide Black Maternal Health Caucus and sits on the board of the Ohio Children’s Trust Fund.

Boyd has also been a servant leader in her community, as a trustee on the board for the Heights Emergency Food Center and for Beaumont Catholic High School, her alma mater. She follows the longtime public service example set by her mother, Barbara Boyd.

Biden appoints Dr. Ala Stanford as Regional Director of Department of Health and Human Services