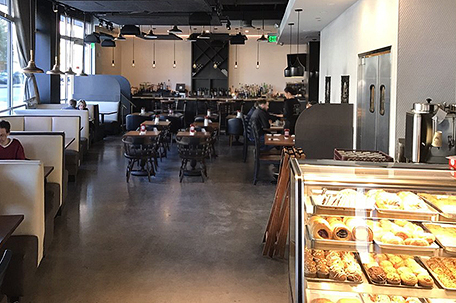 The new City Diner at Broad and South Streets in Center City provides really good food at affordable prices, but you might want to take the Broad Street Line to get there.

Because covering the 2016 Presidential Election for the SUN has kept me on the road a lot this year, and I’ve had to do a lot of that traveling on a budget that can be generously described as shoestring, I’ve really appreciated the existence of the Great American Diner.

I mean, where else can you get a three-course meal, including dessert and a drink, for $20? Heck, if you play your cards right and get one of the specials, that price goes down even further.

So it was my appreciation for the Great American Diner that brought me to the new City Diner on Broad and South Streets on the ground floor of the SouthStar Lofts.

Created by the people who gave us the awesome Penrose Diner located near the Sports Complex in South Philadelphia, I was hoping that this would give me the Penrose experience without having to go a country mile. I also hoped that it wouldn’t cost me as much to eat there as it would for me to rent a loft at SouthStar.

The good news is, the food is great. There’s something for everyone from carnivores to vegans and the bar in the back is filled with the kind of stuff that probably makes good cocktails.

That said, this is a restaurant that you might want to get to via SEPTA. I’ll explain why in a minute.

Joining me in this particular restaurant review caper was Amy Simmons, who usually served as my partner-in-crime as I covered the 2016 Elections for the SUN. We met for breakfast because the best way to figure out if a diner is any good is through the Most Important Meal Of The Day.

We walked into the space, which kind of reminded me of the Manayunk Diner a little bit. The ceilings are high with hanging lights that kind of gives the place a slightly art deco feel. If anything, I kinda wish that the place wasn’t painted gray. 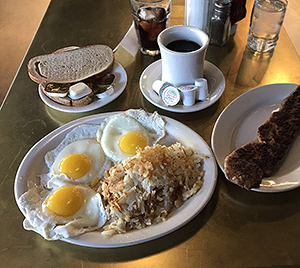 Normally, I get blueberry pancakes at diners, but I wasn’t able to here because the blueberry pancakes they serve have fruit compote, and I don’t particularly care for that. So I went with the French toast and bacon, while Amy went with scrambled eggs, scrapple and bacon with white toast.

While I’m no scrapple connoisseur, Amy is. And she gave it high marks for it’s combination of crunchiness on the outside and softness on the inside. Her eggs were also scrambled perfectly.

And most importantly, the grits were good. They were sturdy and slightly cheesy and required only a pat of butter and some salt to make them perfect. Not all diners are good at the grits thing. In fact, some of them should just stop trying. But the grits at City Diner are in league with those at the Trolley Car in Mt. Airy, whose cheese grits are divine.

I went with the egg dipped French toast. I’ve had bad experiences with diner French toast in the past, so there are few places I actually get it. City Diner will be added to that list because the toast was crunchy along the edges, soft in the middle, and the egg batter used to dip it in was tasty.

The bacon was also good. It wasn’t too hard or too soft, and it wasn’t greasy, which tells me that once it was fried, it was put on a paper towel to get rid of the excess grease. I also liked that I didn’t have to ask our waitress, who was awesome, for a plate for the bacon. It’s hard to eat French toast, or anything really, when you have to move your bacon around to get to it.

We both had coffee, something that we’ve kind of been living on for the last few months. It was hot, and tasty, and in Amy’s case, didn’t require cream, which she tells me means that it’s fresh.

I didn’t get anything to take with me, although the Broccoli and Cheddar Soup sounded tempting, but Amy grabbed a slice of the diner’s carrot cake. Unlike most carrot cakes, which can be kind of dense, she said that this one was light and tasted more like a spice cake, with a light cream cheese frosting.

And we got all of it, plus some awesome service from a very nice waitstaff, for $30, including tip.

So I can definitely recommend City Diner for that meal that you grab after checking out a concert at the Kimmel Center or that play at the Merriam Theater.

But I’ll also have to recommend that you take SEPTA to get there.

You see, the only downside to the City Diner experience is that parking is at a premium. In fact, there was no on-street parking on the day I visited and there’s no public garage nearby. So unless you want to have an inexpensive dinner coupled with an expensive ticket, hit the Broad Street Line. When you get off at South Street, it’s literally right above you.

Location: Broad and South Streets, in the SouthStar Lofts Building

Prices: $$ (Affordable for families, broke college students, and for that special date.)

Over 30,000 samples of bacon showcased during Pennsylvania Bacon Festival at Xfinity Live! Oct. 4