“Don’t let anybody throw shade on your shine!” 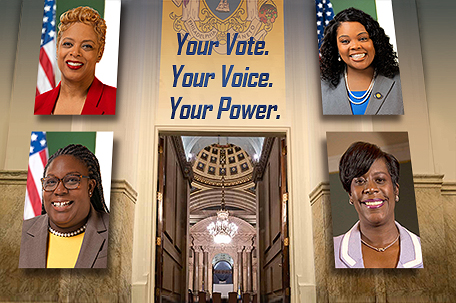 In the first in a series of Women’s History Month webinars, the Philadelphia Commission for Women brought together some of Philadelphia City Council’s most prominent women to talk about their political journeys.

For women to make their voices heard in politics, there are a lot of obstacles they must overcome — from the fact that politics is still considered a “man’s world” by some to the challenge that women sometimes have raising money to run, and the stereotypes that women, especially women of color, must fight through.

During the Philadelphia Commission for Women’s “Your Voice, Your Power, Your Vote: The Women of City Council,” four of the six women who are currently members of Council — Majority Leader Cherelle Parker, at-large Councilmembers Katherine Gilmore Richardson and Kendra Brooks, and District Councilmember Cindy Bass — shared their experiences as women who just happen to be elected officials.

Councilmember Maria Quinones Sanchez, who was scheduled to participate in the panel, did not attend.

During the hour-long discussion moderated by commission chair Vanessa Fields, president of the Philadelphia Chapter of the National Organization for Women, the councilmembers shared their stories of the challenges and triumphs of running for office, how they made it through, and how you can do it, too.

Before Kendra Brooks became the first member of council to be elected as a third-party candidate, she was an activist working on behalf of the people who are often left behind in Philadelphia.

She decided that it was time to find a new way to work on behalf of these people from the inside.

“I have been doing advocacy and activism for, like, 20 plus years and I’ve been fighting for communities from the outside you know,” Brooks said. “And I said, why not take a chance and do the same thing from the inside out and build partnerships and coalitions on both sides of government? I just thought, ‘If not me, then who? Who has a better understanding of the community? To me, it was just continuing to fight for my community in a different way.”

“I learned at a very early age, that there was a different treatment received by what I call the haves and the have nots,” Parker said when discussing how she found herself in politics. “Because I lost my mother early, my grandmother took care of me and had to get public assistance to take care of me. So, we had to go to a place called the 3-2Center, which is where my grandmother would pick up her food stamps and the $98 in cash that she would get every two weeks to take care of her grandchild. I remember how the spirit of my grandmother changed. After she got the food stamps, when she went to the window, I watched how people looked at her. I watched how they treated her. And I knew that she did not like that interaction.”

For many of the Councilmembers, wanting to make their neighborhoods better was the main motivator in taking the chance to run. For Bass, it was a belief that North Philadelphia deserved better.

“I’m born and raised in North Philadelphia, and I never was happy with the way my neighborhood looked,” she said. “I just felt like we should have more, we deserve more. We, you know, pay taxes just like everybody else. So, why was it that the community that I was born and raised in look the way it did and didn’t feel safe? I didn’t feel it had the same amount of amenities that other neighborhoods that we traveled to had. My mother encouraged us to be engaged.”

When Gilmore Richardson’s mentor, former Councilmember Blondell Reynolds-Brown, decided not to run for re-election, she decided that the time was now for her to try and fix the things that she thought were wrong about the city.

When the community itself co-signed that decision, Gilmore Richardson felt vindicated, she said.

“I recall my phone ringing off the hook and hearing people say, ‘Kathy, you have to run,’” she said. “To hear that from the community that folks in the community wanted me to work on their behalf was also a part of the reason that I decided to run for Philadelphia City Council at large.”

Both running for office and being a public official aren’t necessarily easy things, the Councilmembers admit.

Being able to stand up for yourself and what you want to do is important, Parker said.

“For me, it’s been [that] I’m not allowing anyone to put me in a box,” she said. “When I went to Harrisburg, I can remember getting there, getting my office assignments, and then waiting on my committee assignments. And they asked you what you’re interested in. Before I could give my answer, they immediately said, ‘Well, the Human Services Committee, we know that you’ll be interested in that. We know you’ll be interested in the Health committee.’ And I said, ‘Well, retirement security is extremely important to me. So, I’m interested in being on the Finance Committee [and]Appropriations because the budget has to be approved through the Appropriations Committee, and I want to make sure that I’m a part of that discussion.”

“Some of the biggest challenges that I remember facing in 2019 were that ‘Oh, she’s too young. Yes, she has worked in city government for a while. But she’s a little too young. She has young kids,’” Parker continued. “And so, all of those things came into the picture when I was just as qualified, if not more qualified, than most of the people who had been in the race because I started in city government as an intern, [a]volunteer when I was 15 years old, worked in every single position as a staffer in City Council, navigated city government to make it work for constituents day in and day out, and had really given my life to public service. So, what we did, we doubled down on it. Said “Moms Get The Job Done.” That was my hashtag. If anybody could get the job done, it’s moms, because we  can take care of our families, we can go to work, we can still spend time with our families and be good colleagues to the people we serve with and provide good service to the people that we serve.”

It also helps if you have a thick skin and a certain amount of resolve.

“When I was running for office, everyone told me that there wasn’t a chance in hell that I was going to win,” Brooks said. “It was like ‘You have the audacity to do something that’s never been done.’ I felt like I was born with that audacity. Nothing was ever given to me. Anything I’ve wanted, I had to go for it.

“My background is being a practitioner of restorative practices, traveling around the country, showing people how to work together, and how together we can make a difference,” Brooks said. “We don’t always have to agree, [but] we have to get to a win.”

It also helps if you take your cues from the people you’re trying to help, Parker said.

“I listen,” she said. “There is nothing more frustrating for me than someone who hasn’t walked in the shoes of somebody, for example, who’s living in poverty. But instead of asking the folks who are closest to the pain what do they think the potential solutions are, they begin to proffer solutions for people.”

But in the end, no matter what the challenges you face as a woman in elected office, being prepared and ready to help is the main thing that counts in the end.

“My mentor used to say that we are walking on a tightrope backward with high heels on blindfolded and trying to get it right,” Gilmore Richardson said. “And she’d also say that you have to be able to walk on water and fly to even be considered equal in this business. So, you always show up as your best self with all the information necessary to show that you are steady and ready for the task ahead.”

The Philadelphia Commission For Women continues its series of webinars on Women and Political Office with a workshop with a youth focus that talks about building your personal brand and how your personal story can build a movement.

For more information on the webinars and how you can participate, please go to Mayor’s Office of Engagement For Women’s website at: https://www.phila.gov/departments/mayors-office-of-engagement-for-women/.