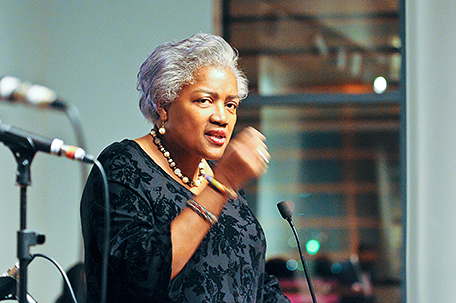 ABOVE PHOTO:  Donna delivers! NAACP awardee and keynote speaker Donna Brazile gave an impassioned speech about her appreciation for the NAACP and importance of voting at this year’s Gala reception.   (Photo: Bill Z. Foster)

While the NAACP is an official 501c3 non-profit organization, it still strongly supports “political renewal” and that’s just what happened last Friday evening, during the Philadelphia NAACP’s Annual Awards Gala.

Now that we are getting closer to the Nov. 6th mid-term elections, many organizations, including non-profits, are encouraging would-be voters to go to the polls and vote on Election Day on Nov. 6.  Political strategist and author Donna Brazile, the 2018 Fannie Lou Hamer Political Leadership awardee for this year, hit several powerful notes as she delivered the keynote address at the gala.

During her address, Brazile talked about her long history with the NAACP and how important an organization it remains.

“As a child I joined the NAACP for $5 dollars. I later paid my dues as a college student for $10 dollars. I count myself among the millions with a lifetime membership to the NAACP,” Brazile said, “And I continue to pay my dues, because I want to continue to pay it forward, not just backwards. I am proud of this organization.”

“You, [the NAACP] are 109 years old and you are still young at work. You have done so much for so many. You have led the campaign to end Jim Crow and lynching across America.  And we remember those that fought to segregate our schools, and open doors to minorities to serve in government and yes, to give us the ballot box so that we could vote,” Brazile continued. “We’ve got 25 days before the mid- term elections and our time is important.  I want to spend my time with you all tonight, and then I want you to post it on Twitter or Facebook or Instagram that I was here with you so that you know you can tell the world where I spent my Friday night. I spent my Friday night [here] three weeks before the election. I’m standing up with an organization that has stood up for all of us. That’s why I’m here.

But I’m telling you this story because some of our people don’t know your history. They don’t know your struggle. They don’t know you went lawsuit, after lawsuit, after lawsuit, and legislation after legislation until we arrived at this moment, and we elected our first Black president 10 years ago. But our work is not done.  We put Barack Obama in the White House and what has followed is somebody who is willing to tear up everything that Barack Obama and all of us have ever stood for.   I am sure that if W. E. B. Dubois, Ida B. Wells, Roy Wilkins and countless others were alive today, they would be ashamed that so much is going on and we have not put together the political strategy to defeat those at the ballot box who want to take away the rights that we, Reverends, have so painfully fought for. And so, Brother Muhammad, I tweeted out last night that Kanye West is trying to set us back 155 years by going inside the White House, using profanity that I don’t even use. But the worst harm he perhaps committed last night was to tell the world that Black people were somehow or another dependent on welfare.  What a lie. What a sham. The average age of the person on welfare is under 30 and the face of that person is a White female, not a Black woman, or a Black male.”

Brazile continued, “So Kanye, as Diddy said, needs to know his history if he’s going to go sit in somebody’s house and try to preach to us. But rather than to condemn him and boo him, we should pray for him and maybe Kim Kardashian can teach him a little lesson so that his children will know their history because they should know their history. Reverend we should send him what I call a complimentary membership to the NAACP because whether he knows it or not, his children will need it and they will need you one day.

I want to talk a little bit about where we have to go from here.  You see I’m not off the battlefield. I started working in politics at the age of nine and I’m just short of my 59th birthday. I have 50 years in the game. I have 50 years and seven presidential campaigns, 19 state and local campaigns, 56 congressional campaigns, in the house and senate, and ladies and gentlemen, if I get to one more state, to Montana before the end of this month, I might make it my 50th state and I’ll be Miss USA without the bikini. I’m running harder, and let me tell you this: I have not been paid by the Democratic Party since the year 2000 when I managed Al Gore’s campaign. This is not about payment.

I got myself here. But what the Philadelphia Chapter of the NAACP did for me was to provide me with scholarships so I can continue to do what you all do, and that is to provide an opportunity for kids like myself, who grew up poor, to be able to go to college and get their education, so thank you, NAACP.

I’ve been the party chair twice, the first Black woman to lead a major political party, the first Black woman to manage a presidential campaign. It’s not my fault that we had more votes. But when you don’t control the Supreme Court, sometimes you often lose. We’ve got too much at stake to even think about sitting home or forgetting that Tuesday, November 6, 2018 is Election Day. If you don’t mark that date on your calendar, then I tell you don’t complain and don’t call the NAACP when you get pulled over. This is a day, and this is a moment.

While I am a Democrat and I’m proud to be a Democrat, I am urging every American to get out and vote. I’m urging everyone to cast their ballot. I am telling you this because we know there are states across America today that are trying to prevent people that look like you and me from voting and I’m not making it up.”

Bottom line — get out and vote on November 6th. In Pennsylvania, the polls open at 7am and remain open until 8pm.

Final notes: I was very proud to be one of the honorees at the NAACP Gala on October 12th. I received the “All Star Media Award” and it humbled me as I was reminded I’ve been able to stand on the shoulders of the likes of the late Cecil B. Moore, Esq., one of our past presidents of the local chapter, as well as on the shoulders of J. Whyatt Mondesire, our most recent past president of the Philadelphia chapter and today, I stand on the shoulders of Minister Rodney Muhammad. I will forever be grateful that a man by the name of Alphonso Deal signed me up to be a member of the NAACP when I was 21 years old and I’m also glad for the one-on-one conversation I had many years ago with the late Rev. Dr. Benjamin Hooks, when he was president of the National NAACP. He told me to always carry three items in my wallet: My drivers’ license, my voter registration card and my NAACP membership card.  As he put it, “You never know when you’ll need it.”

Why Romney bothers to address the NAACP