Doing It In The Mix 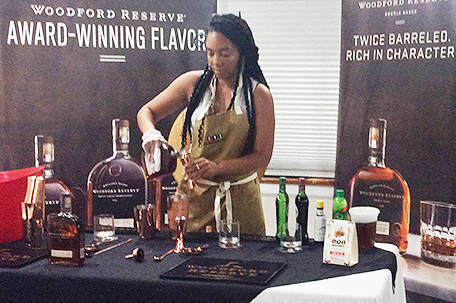 ABOVE PHOTO: Bartender Giszette Presley mixes a cocktail as a finalist in The Power of The Palate. (AP Photo/Joel Ryan)

Five of the City’s best bartenders faced off for prizes and bragging rights at the Power of the Palate bartending competition during Black Restaurant Week.

No matter how hard you try, it’s really hard to walk past a man hawking a drink called “Bacchanal”.

Especially if the man is as engaging as Maraud Pemberton and he’s trying to get you to try said drink in the hope that you’ll vote for it.

Through the collective of bartenders he works with, Raising The Bar, Pemberton treats the guests of the private parties at which he bartends to drinks like “Bacchanal”, a concoction that includes Woodford Reserve Bourbon, peaches, and host of other ingredients.

“I created the drink before I created the name,” he said. “I wanted to use African flavors like tamarind and other accents. It’s sweet, it’s spicy, there’s a lot of things going on with this drink.”

Pemberton was one of five bartenders vying for a $500 cash prize and bragging rights around the city as part of “The Power of the Palate,” a bartending competition held at Open Space, as part of Black Restaurant Week. Using bourbon from Woodford Reserve, the event’s sponsor, the five bartenders — Geren Hawthorne, Giszette Presley, Camella Poindexter, Pemberton and Darrien Everett —- created signature cocktails that attendees got to try while noshing on bites from 48th Street Grill, Coco’s Chicken and Waffles, Star Fusion, and Booker’s Restaurant and Bar.

Armed with wristbands and a poker chip, everyone got the chance to taste the cocktails and use their poker chip to vote for the drink that they liked most. The top three vote getters then got the chance to show their stuff for a group of celebrity judges and tastemakers for a cash prize and a trophy from Woodford Reserve.

This is the second year for the event, which was held from June 9 through June 23. When Luckett and his co-founders Falalyn Ferrell and Derek Robinson took a look at Philadelphia’s culinary community, they knew their concept —there are also Black Restaurant Weeks in Houston, Atlanta, Los Angeles, New Orleans, Oakland and Dallas in addition to Philadelphia — would be a big hit.

“There was a void in the market,” Luckett said. “Because Philadelphia has such a large Black population and the culinary scene was so good here, we knew this would have the support of the Black community.”

That support was on full display during Power of the Palate as people walked around to taste the cocktails. Hawthorne, who bartends as “Liquid Libations” contributed a strawberry lemonade infused with bourbon called the “Slim Thick Lemonade,” which he said was dedicated to the ladies.

While his cocktail was popular with some, it didn’t make the top three. Those bartenders were Poindexter, whose pomegranate tea with lime infused with bourbon and CBD oil was a big hit, and Presley, whose peach flavored version of a Bourbon Smash was also impressive. The People’s Choice award winner was Darrien Everett’s cocktail, which was his homage to a healthy breakfast and included egg whites, maple syrup, and walnut flavoring.

But the ultimate winner was Poindexter, whose Cold Getaway cocktail was a hit with judges Nate Rogers of Mix It Up bartenders, Syreeta Martin, host of WURD’s “The Lounge”, Cousin E., and K. Foxx of Radio One’s Q-Deezy morning show.

For Poindexter, who has been a bartender for 10 years, the competition was a chance to showcase her skills.

“I like the creativity of [bartending],” she said. “This plays to my strengths.”

In addition to the bartending competition, Philadelphia Black Restaurant Week included “Aroma”, a culinary panel discussion held at the Enterprise Center that tackled the issue of having a successful culinary business. The discussion included product placement, distribution, raising capital to start a food business, strategies to make your business successful and how to mass produce recipes.

Open Space was also the setting for the Art Of Flavor dinner. This year’s dinner was prepared by Chef Eli and featured CBD oil in all the preparations.