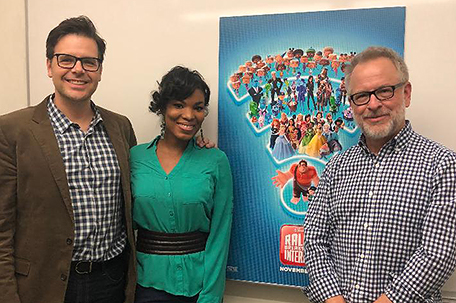 The incredibly gifted writers and directors Rich Moore and Phil Johnston made audiences fall in love with the unconventional bad guy turned hero in “Wreck-It Ralph” in 2012. The dynamic duo captivated our hearts again in a tale about humanity and embracing our differences “Zootopia”. The creative team is back and better than ever with the sequel to “Wreck-It Ralph” called “Ralph Breaks The Internet.”

The original loveable characters are back; Ralph (voiced by John C. Reilly); Vanellope (voiced by Sarah Silverman); Felix (voiced by Jack McBrayer) and Calhoun (voiced by Jane Lynch) along with a couple of new characters: Yesss (voiced by “Empire’s” Taraji P. Henson), and Shank (voiced by Wonder Woman star Gal Gadot) for a brand new adventure. Rich Moore and Phil Johnston sat down with the SUN to talk about this outstanding film.

“Wreck-It Ralph” tells the story of Ralph, an arcade video game villain, who has bigger dreams beyond being the bad guy who destroys everything in his path. Ralph sets out to prove he is worthy of being a hero. On his journey, he finds himself in a game called “Sugar Rush”. He meets a firecracker car racer named Vanellope with a unique glitch. The unlikely pair set out on a journey that leads them both to self-discovery and an unbreakable bond of friendship. In “Ralph Breaks The Internet,” Ralph’s whole world is centered on Vanellope and keeping her happy. When Vanellope’s game console breaks, the pair set out on a mission to the unknown — the internet — to fix the console. In a race against time, they are tasked with finding the broken part to Vanellope’s game before it’s too late. Rich Moore spoke about the transition from the ending of the first film to the sequel.

“The very first thing that we talked about was could we do another one in the arcade?,” he said. “We said no. It just seems like it’s so nostalgic and so set in the past. If we do another one, it needs to be more contemporary. Then pretty quickly, we came up with the idea of plugging a router into their little train station and that became a gateway to the internet.

“The first one wrapped up to our liking very nicely,” Moore continued. Ralph had no friends — he just wanted someone to love him. He finally made a best friend and life seemed really good for the both of them. Then we looked at the very end of the movie for the first one, and there’s a line where he says, “If the kid likes me, how bad can I be?” Then we started picking at that and said [to each other that] actually that statement is not the most healthy way to live. He is saying that he defines himself by what his best friend thinks of him. She’s a great best friend, but what if she doesn’t like him some day? That’s when we knew that these characters, especially Ralph, had some more growing to do.”

The growth that the characters experience centers around the idea of what it means to be in a healthy friendship… one where each party is able to be open, honest and the best version of themselves. “Ralph Breaks The Internet” addresses that dynamic brilliantly. In most animated films, the audience knows who the antagonist is going to be. In “Ralph Breaks The Internet”, the audience gets a creative approach to an intangible villain.

“Frankly, it was a difficult thing to get across,” Johnston said. “The more we kicked those ideas around, it was a movie about a friendship that has grown slightly toxic because of the co-dependent relationship and much of it because of Ralph’s insecurity… to say nothing of the fact that Vanellope wasn’t honest with him about what she actually wanted. If we could find a way to make Ralph’s self-doubt and insecurity actually be the main force of antagonism and then turn that into an actual monster and somehow make sense of that, that’s what it needed to be. That was followed by, now how are we going to make it?”

Moore echoed Johnston’s sentiment adding, “We would say Ralph is holding onto her so tightly. Visually, if at the end of act three, we see Ralph let go of her, or something that represents his insecurity that would never have let her go at the beginning of the story, kind of releasing her — that’s where we want to end up. Any antagonist or third party that was traditional never got us to that point.”

In addition to the wealth of creativity used to tell this story, paired with unexpected turns, plot points and heartfelt moments, there are several “laugh out loud” moments. Many of those instances happened courtesy of the Disney Princesses and their modern day approach to their individual storylines. Disney fans will be begging for a Princess movie! “Ralph Breaks The Internet” also does a wonderful job at addressing the importance of community and online culture, offering the words of wisdom, ‘don’t ever read the comments.’”

The lessons that people can walk away with from this film far exceed the scope of friendship. In every relationship, you have two people growing at different paces. One person could be happy within the monotony of everyday life, while the other is bored, dying for change and excitement. But how does one find common ground with someone they love without hurting them? How can one find that balance, while simultaneously being true to self? Moore and Johnston offered their perspective.

“What I’m really proud of about the story is [that] Ralph likes his little hometown and that’s ok. Vanellope likes the big city of the internet, and that’s ok too,” Moore said. “We’re not saying he’s wrong and she’s right, or she’s wrong and he’s right. It’s whatever it is that makes you comfortable that’s fine… and it doesn’t have to tear apart a relationship.  Hopefully a parent could relate to it, friends could relate to it… a spouse could relate to it,” Johnston added. “The simple fact is, relationships are hard, and it takes hard work and nurturing. In a world where we are so encamped and polarized, I think it’s not bad that people think that just because you think differently, doesn’t mean we can’t have a dialogue.”

“There are scenes that I love, but I’m most proud of the emotion at the end because it feels true to me,” Johnston said. “I feel like with these two characters, I love them so much that the emotional ending is earned.” Moore shared similar feelings about the end of the film.

“To me, the icing on the cake for this movie that’s so funny and so crazy is that there is still an emotional through line to it,” he said. “The scene where she hugs him and tells him she loves him always makes me cry. I feel weird because we made this… I know what’s coming, and it always hits me every time. So for it to affect the people that worked on it, that makes me very proud that we were able to kind of hit that height at the end. It sneaks up on you!”

“Ralph Breaks The Internet” is a masterpiece in cinema. It is safe to say this film will become a classic in years to come. “Ralph Break The Internet” opens in theaters nationwide on Thanksgiving eve, Wednesday, November 21st. Head to the theater and bring the family… it’s a must see!

Author T.H. Moore explores ‘what if’ scenarios in history with new novel, “The Devil’s Whisper”