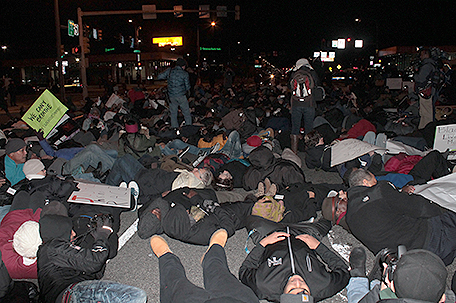 There was an air of melancholy and fiery civil disobedience as gatherers rallied outside of the South Philadelphia Sports Complex this past Sunday.  Members of the POWER, Philadelphians Organized to Witness Empower, and Rebuild, Organization were on hand as early as 6PM as men and women of the cloth and their fellow flock were brought together to pray and help raise their voices against injustice in our city as well as across the country.  This group of individuals made their message clear Sunday night: they want police brutality and their excessive use of force with unarmed black bodies to cease. 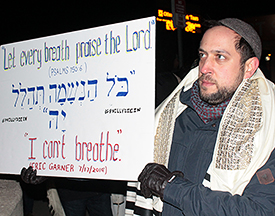 All backgrounds were represented, amounting to approximately 250 people in attendance this blisteringly chilly Sunday evening as they were to stage a die-in outside of the Complex after the Eagles v. Seahawks game, blocking off traffic on Broad and Pattison streets for 4 ½ minutes to remember the 4 ½ hours Michael Brown’s slain body was left in a Ferguson, Missouri street this past August.  Organizers wanted to express peaceful outrage over the cases involving both Michael Brown and Eric Garner standing together in solidarity, raising their voices in protest, and lying together in silence as many held signs and banners expressing their disgust with the unsatisfactory justice system and law enforcement across the country.

Many South Philadelphians exiting the complex were not happy about the demonstration, as the Eagles had just received their fourth loss of the season to the Seattle Seahawks by a score of 24-14, making an already sour taste in their mouths that much more bitter.  Fans were frustrated as they wanted to get home after a crushing loss, while others were inebriated and wanted to provoke protesters.  While organizers lay in the street silently, there was a slight commotion as onlookers honked, jeered, cursed, and berated them.  I was on hand to show my support and photograph the demonstration and I was rudely harassed by fellow members of the press.  One particular demonstrator found this unacceptable, and came to my defense, quick to tell my white counterparts that a black woman has the right to stand and photograph just as much as they did, if not more, as this was a protest in defense of people of my background.  They quickly took their photos and moved along to less outspoken demonstrators.  To that young lady, I say thank you for using your voice, it is valued.

When organizers began to rise from the intersection, they chanted “hands up, don’t shoot,” as angered Eagles fans responded with “hands up, don’t loot.”  Nonetheless, there was steadfast composure amongst protesters as they continued to gather and chant, carrying their signs and banners of protest throughout their time of gathering.  People across the country are rallying together in efforts to create a reliable justice system of equal standards so that this time next year there will not be another name added to the list of black casualties due to a trigger happy officer.