Detoured but not denied 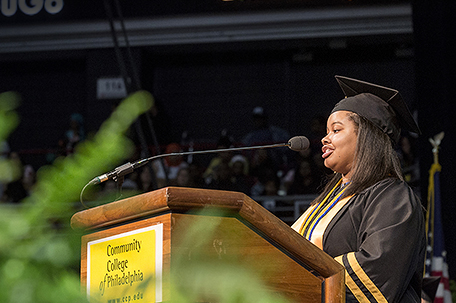 Community College of Philadelphia recently had a class speaker you all should know about – her name is Amber Young.

A quiet and well-thought out young lady of 21 years old, Young became — at least to her peers and professors — an emergent leader, despite worrying what others may have thought of her due to some life changing decisions she made two years before.

Danyelle Watson Young, an administrator at CCP and Amber’s proud mother, could barely suppress her tears, now that she had the pleasure of sitting in the VIP area with her child and being able to escort her on stage as the class speaker. Through those tears, she shared with passion and relief her daughter’s journey to this place.

You see, Amber is an excellent example of doing what is good and right, despite what the feedback would be from those closest to her.

Amber had been accepted to a four-year institution as a high school senior and was given the news that her college tuition would be fully covered. It was not her first school of choice, but she went in good faith, as she is an excellent student.

What Amber encountered on this campus was a level of debauchery that she simply was not prepared for. She kept communicating to her parents, who helped to navigate her way through that first year. The situations she encountered were so untenable, that she gathered her courage and told her parents she could not return there. Amber was losing sleep, felt anxious and afraid, and stayed in her room when she was not in classes.

Amber was clear that she worried about the reactions of first her parents, then close friends and family. But not only did her parents fully support her, her mother was secretly happy when she announced she wanted to attend CCP.

CCP’s smaller environment allowed Amber to embrace adulthood at her own pace, and once she was comfortable taking on small things beyond her classes where she absolutely thrived, she emerged as a leader who won four major awards, which included “outstanding student leader of the year.”

“To see how far she has come, this shy person…to see how much she has accomplished, I can only say thank you, Lord, because without our village…” Danyelle said tearfully, while Amber sat with a soft and knowing smile on her gentle face.

It is difficult as a parent to want what is best for your child, and to feel helpless when it seems all is lost. Amber had so much love and support, that she was able to rise above the hurt and disappointments she experienced to become the class speaker. How about that?

She is a shining example that a detour is not a denial, and an inspiration to all who hear her story.

Amber plans to move on to a four-year institution in the fall to finish her degree, and this time we have no doubts, she is ready.