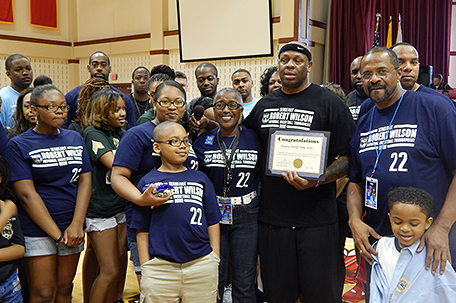 Deputy Sheriff Mike Terry, with the support and help of Sheriff Jewell Williams, made it a special Saturday for the family of Sergeant Robert Wilson during a round-robin basketball tournament at Chestnut Hill College.

Terry, who is the godfather of Sergeant Wilson’s son, Quahmier, told the more than 200 people at the tournament that Wilson’s son will be financially okay for the rest of his life, and that he may have lost a biological father “but me and dozens more like me will always be there when he needs us,” he said.

Sheriff Williams also presented Terry with a certificate in support of his “hard, and selfless work in helping others”, and for “exemplifying the qualities that all of our deputy sheriff’s strive for on a daily basis.

Those wishing to donate to the trust fund can make a check out to: